Ghost Nets of the Ocean

A seemingly harmless piece of fishing net drifting on the ocean can strangle a hapless sea turtle travelling to its nesting ground. Sharks, coral and other marine life all over the world have also suffered similar fates through entanglement in fishing nets. There is a dire need for action against such mindless pollution of the oceans, because it endangers marine life, and inevitably, humans. How does one transform lethal debris into a poignant message for education and change? 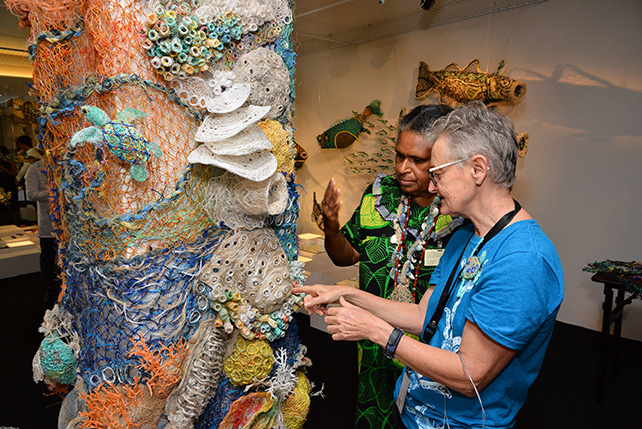 Artists from the Erub Arts group, drawing inspiration from the ocean and from stories of indigenous island life, have put this debris to use in a meaningful way. Hailing from Darnley Island in Australia’s Torres Strait, they have transformed abandoned fishing nets, or ghost nets, into a spectacular art installation featuring precious marine life and provoking reflection on how we humans are impacting the world’s oceans. Over 80 colourful sculptures of fish, turtles, squids, jellyfish and corals woven from ghost nets will be showcased in Ghost Nets of the Ocean or Au Karem ira Lamar Lu – a unique marine-themed exhibition celebrating the island, the reef, the ocean and the beauty of life. 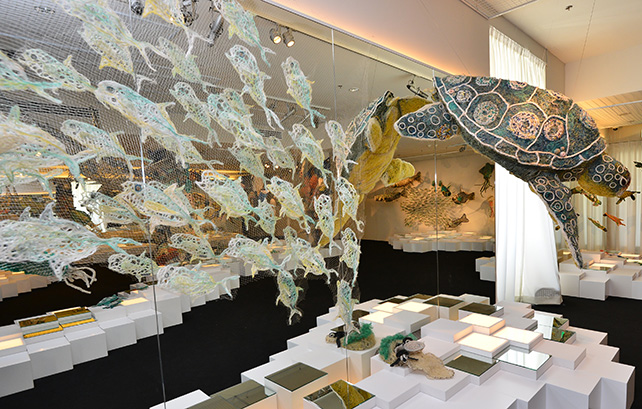 Giant turtle and fishes, showcased as part of the Ghost Nets of the Ocean exhibition at ACM. Photo courtesy of ACM.

The Ghost Net Art Project first began in 2008 as an initiative of GhostNets Australia, a non-profit organisation which champions and coordinates the removal, by local indigenous communities, of ghost nets from remote beaches along the coastline. Local artists appropriated the nets and incorporated them into their works of art and craft, first producing bags and baskets, and later creating large-scale artworks inspired by personal and cultural stories. Marine creatures feature strongly as they are totemic animals for Torres Strait islanders. The artworks on display in the Asian Civilisations Museum were created by Lynnette Griffiths, Marion Gaemers, and 18 Erub Arts artists over the past year. These artworks are being showcased for the first time in Singapore. 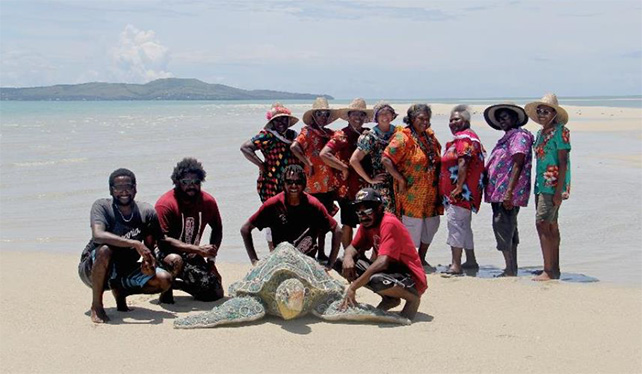 The exhibition is complemented by the Tiny Turtles project – an installation of smaller-scale artworks created as part of a collaboration between Torres Strait schools, local and international schools in Singapore, and children with special needs in Singapore. Over 700 miniature turtles woven from ghost nets will be displayed on the lawn of the Asian Civilisations Museum, as part the museum’s Children Season 2017 programmes. Also on offer during the June school holidays in Singapore are a wide variety of craft workshops, storytelling sessions and talks, drama and musical performances, and gallery trails. 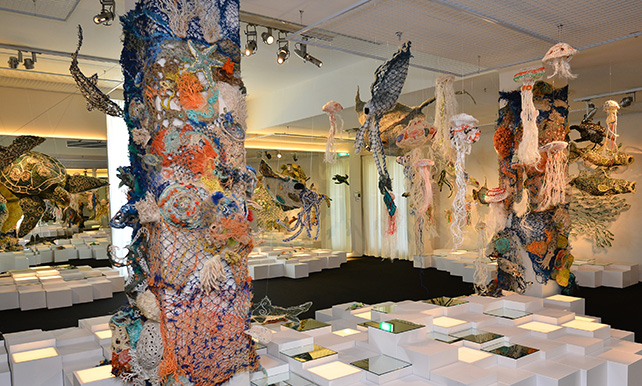 Marine creatures and corals in the Ghost Nets of the Ocean exhibition at ACM. Photo courtesy of ACM.

“This arts and cultural exchange echoes Australia and Singapore’s commitment to strengthening the connection between peoples in our countries, and in a more profound way, I believe it will also allow visitors and a younger generation to better understand the world in which we live. As maritime nations, we have a shared responsibility for the health of the oceans. I hope the remarkable art of Au Karem ira Lamar Lu inspires and sparks important conversations in this region on pollution, recycling and marine conservation.” 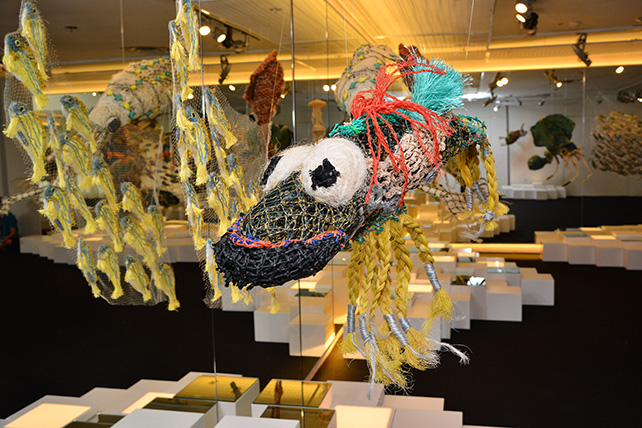 Marine creatures handwoven from ghost nets, showcased at the Ghost Nets of the Ocean exhibition at ACM. Photo courtesy of ACM.