A Traveller’s Reverie: Photographic Memories of Afghanistan’s Past 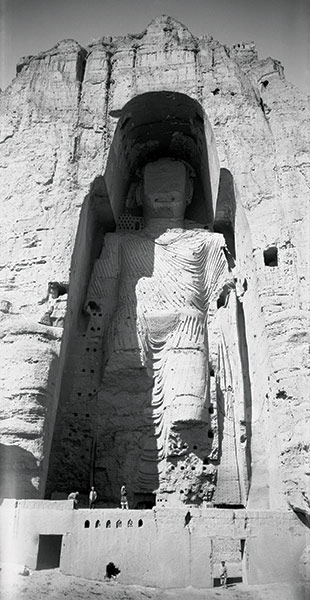 The Buddhas of Bamiyan were two 6th-century monumental statues of standing Buddha carved into the side of a cliff in the Bamyan valley in the Hazarajat region of central Afghanistan, 230 km northwest of Kabul at an altitude of 2,500 meters.

A Traveller’s Reverie: Photographic Memories of Afghanistan’s Past is a unique photographic exhibition of Afghanistan and its people from 1925 to 1934, when the country opened up to the outside world and saw foreign influence for the very first time.

Curated and designed by Olivier Rolland, the 32 black-­and-­white images and 50 stereoscopic or 3D pictures show landscapes and Afghan people in their everyday lives, in souks, villages and the countryside.

A significant part of the exhibition is dedicated to the viewing of authentic 3-dimensional pictures of a past age. It is little known how popular and widespread the art of 3D was before 1930. Especially for the exhibition, the stereoscopics or 3D pictures have been processed from the scans of the original photographic glass plates.

“The technique makes the pictures all the more vivid and moving. And acts as a crystal ball. There is a stark contrast between the immediacy and intimacy of these close views of people you can almost touch, and the unmistakable feeling that this is a bygone era, never to be seen again.” says Mr Rolland. “The purpose of this exhibition is to share with visitors a glimpse of a unique and special distant culture. This window on Afghanistan’s past was opened to me as a child when I stumbled upon a treasure trove of pictures taken by my grand-­father, Albert Léon, almost a century ago.”

The exhibition offers views of contemporary events, and highlights the epic of the first archaeological research and excavations, that unveiled the rich and complex historical layers of this land.