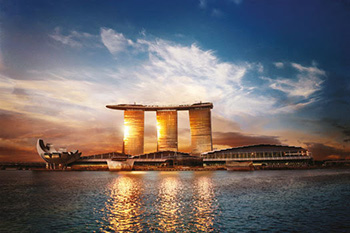 Plans for the inaugural edition of ART SG, a new significant fair for Singapore and the Southeast Asia region continue to be put into place. The first edition will take place from 1 – 3 November 2019 (Preview 31 October) at the Marina Bay Sands Expo and Convention Centre showcasing around 80 established and experimental contemporary art galleries from Singapore, Southeast Asia and the world. The fair will provide the highest standards of design and build, as well as a quality visitor experience.

Magnus Renfrew has now joined Tim Etchells and Sandy Angus as a co-founder of ART SG. Renfrew has significant experience in art fairs, and in the Asia region as founding Fair Director of both ART HK and Art Basel Hong Kong. Renfrew is presently the co-owner and director of Taipei Dangdai, which will have its launch edition in January 2019.

Tim Etchells said, “Sandy Angus and I have been actively developing ART SG for several years and we are ready for its launch. We are delighted that Magnus Renfrew will be joining us as a shareholder and will play an active role in helping us to develop the Fair. We’ve worked together for over 10 years since we created and founded Art HK, which is now Art Basel Hong Kong. Magnus has an unrivalled skill and track record for developing Fairs at the highest level and the launch gallery list for Taipei Dangdai is testament to that.

We are also thrilled that Shuyin will be taking on the role as Fair Director for ART SG. She has done a first rate job on Art Central, and has a formidable passion and knowledge of the Southeast Asian art scene.”

ART SG is supported and welcomed by the Singapore Tourism Board (STB), the National Arts Council (NAC) and the Singapore Economic Development Board (EDB).