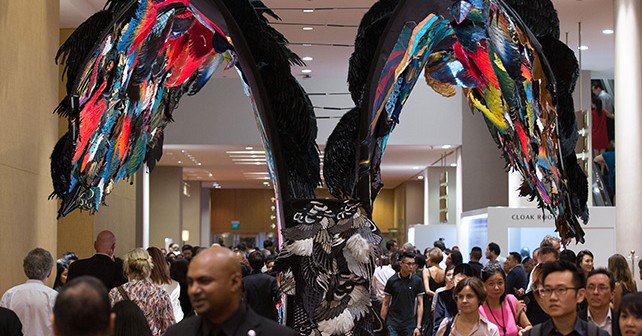 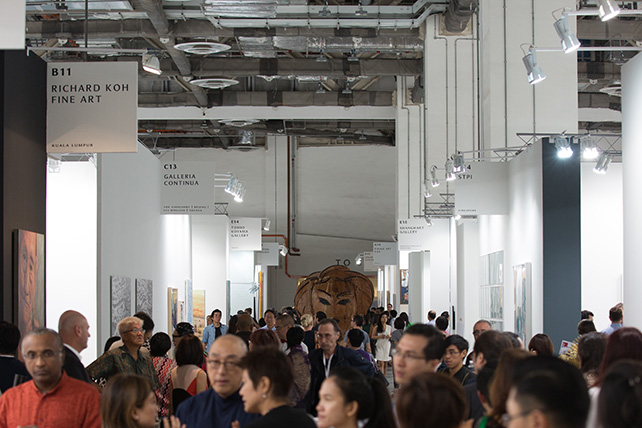 Art Stage Singapore 2016 closes its sixth edition with favourable sales that reflect a still positive art market in the region despite the uncertain economic climate. 40,500 visitors passed through its doors over five days from 20 January (Vernissage) to 24 January 2016. Visitors included respected international collectors and art professionals from around the world. Among them were Mr Simon de Pury, celebrity auctioneer; architect Mr Rem Koolhaas; American artist Ms Joan Jonas who represented the USA Pavilion at the Venice Biennale 2015; as well as collectors Mr Alain Servais from Belgium, Mr Daisuke Miyatsu from Japan, Mr Deddy Kusuma from Indonesia, Mr Lu Xun from China and Mr Robbie Antonio from the Philippines, among others.

The dip in visitor numbers reflect the overall cautious mood of the larger public. However, the significant presence of international and regional collectors was testimony to their sustained interest in Art Stage Singapore and the high quality of the Fair’s offerings. Sales figures reported by galleries demonstrate that the art market remains steady, buoyed by the dedication of active collectors that Art Stage Singapore has once again attracted. 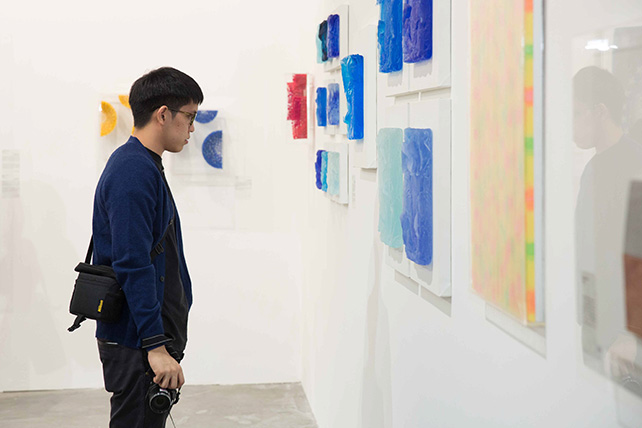 Sales transactions began early with many having been already concluded at the Vernissage. These ranged from cutting-edge pieces to an artwork that fetched over USD 1 million. Sakurado Fine Arts reported total sales of USD 1.2 million for works by Japanese artist Yayoi Kusama. Sundaram Tagore Gallery saw the sale of a work by South Korean artist Chun Kwang Young for USD 175,000, two Steve McCurry prints for USD 42,000 each and a work by Singaporean Jane Lee for USD 33,000, among others. Bangkok-based Number 1 Gallery from Thailand had a sell-out show with Thai artist Kittisak Thapkoa totalling SGD 60,000. Indonesian gallery ROH Projects also sold out works by Syagini Ratna Wulan worth USD 30,000. Singapore-based STPI Gallery reported that all works by the late Singaporean artist Chua Ek Kay were snapped up by collectors. ShugoArts from Japan also saw the sale of works by Japanese artists Aki Kondo and Masaya Ichiba as well as Hong Kongbased artist Lee Kit ranging between USD 5,000 and USD 10,000. 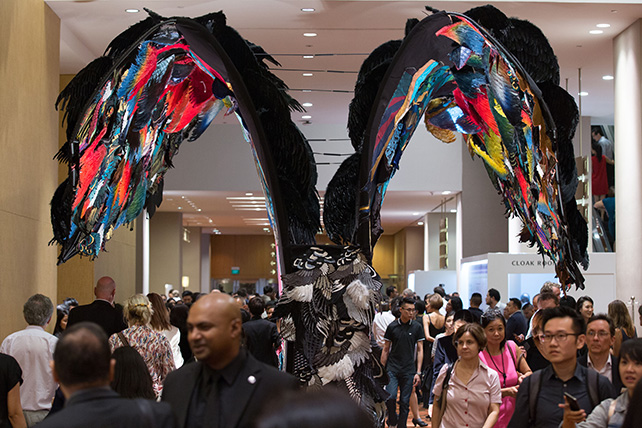 “Sales this year were healthy. We felt that the STPI booth was a melting pot, where many people including clients, artists, curators and museum directors came to meet and network. I felt a sense of camaraderie amongst galleries this year as well. We introduced our clients to a number of galleries and vice versa. There was a collaborative spirit,” said Ms Rita Targui, Director, STPI Gallery. 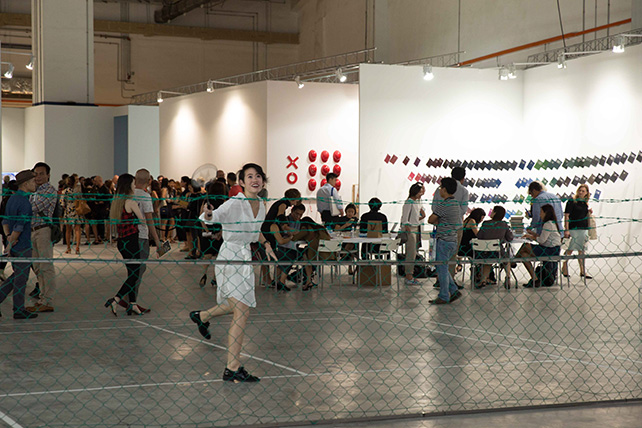 The Southeast Asia Forum was the highlight of Art Stage Singapore 2016. Emphasising the balance between art, commerce and content, the Forum underscored the importance of bridging the art market with the noncommercial aspects of contemporary art. The exhibition, Seismograph: Sensing the City – Art In the Urban Age was widely praised for its highly focused perspective on broad global issues, drawing attention to contemporary art’s significant place in the development of modern society and the central role the artist plays in the context of Southeast Asia. Complementing this, was the Southeast Asia Forum talk series which featured inter-disciplinary discussions about creativity and the underpinnings of cities. Each of the 10 talk sessions was filled to almost capacity, reflecting great interest in the rich content that Art Stage Singapore brings to its audiences. The Southeast Asia Forum exhibition also faired well in terms of sales, thus showing the Fair’s success in making the connection between content and the market. 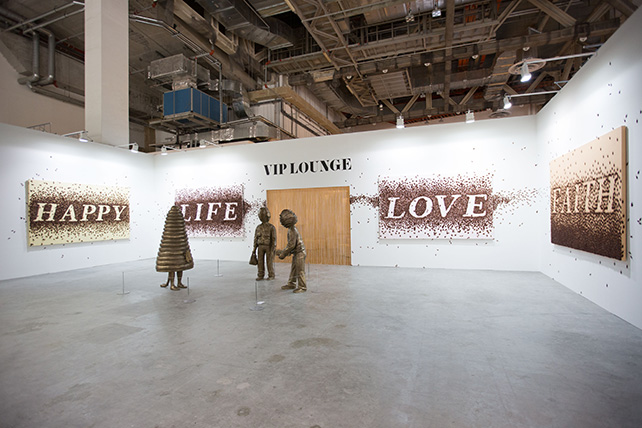 My Plastic Bag is My Society, Me and My Religion_I am Holding Knowledge While Wearing Boxing Glove, Eko Nugroho, presented by ARNDT

“Art Stage Singapore 2016 was for us a successful fair against the backdrop of a gloomy economic forecast. We are committed to always present new and game-changing content that provokes discussions and debates and this we accomplished with the Southeast Asia Forum. The content that we present has shown us to be not only an innovative fair, but also a resilient one. It is an important aspect that will distinguish us from others and which strengthens our position in these uncertain times,” concluded Mr Lorenzo Rudolf, Founder and President, Art Stage Singapore. 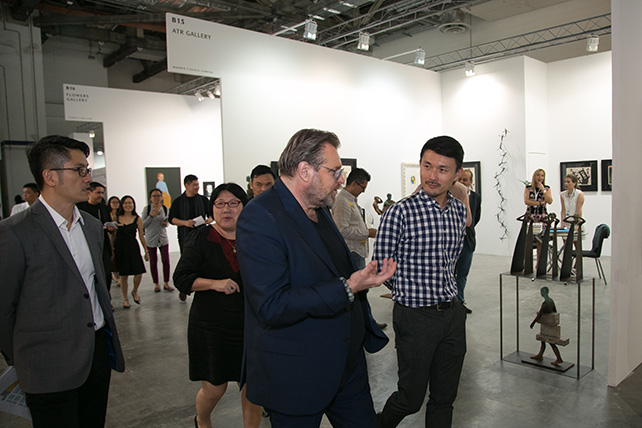 The sixth edition of Art Stage Singapore was on at the Marina Bay Sands Expo and Convention Centre from 21 January (Vernissage on 20 January) to 24 January 2016. It is an anchor event of the Singapore Art Week.