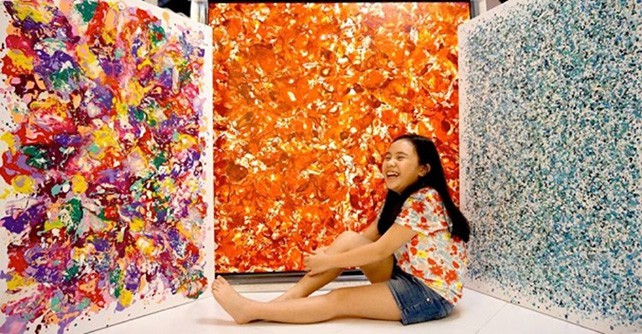 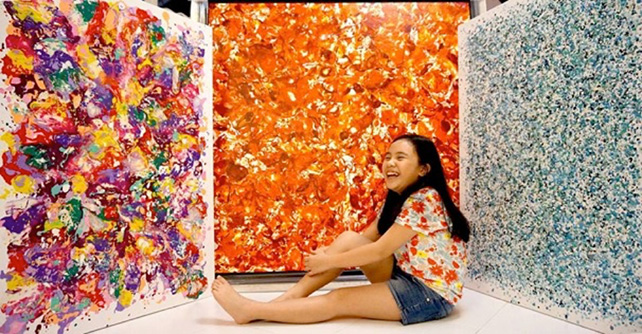 Ashley Ann in front of her artworks

Child visual artist Ashley Ann Tan is only 10 years old but her heart is as big as her paintings, with some towering above her head. Ashley will be gifting 14 of her most recent paintings to raise funds for her less-privileged peers. She will also be dedicating one of the large pieces, titled “Success”, to the founding father of modern Singapore, the late Mr Lee Kuan Yew.

Seasons Through My Eyes by Ashley Ann Tan is a liquid art series, a method that requires Ashley to paint continuously, sometimes up to three hours in one session. The artworks are about using various techniques to manipulate the medium in order to produce an end result, which is sometimes unpredictable as the liquid moves and mixes by itself. This is part of the whole process Ashley finds most enjoyable because even as the artist, she’s not able to predict the final look, which usually comes as a surprise.

“Each session is quite long and it requires Ashley to be disciplined and focused. She’s very passionate about her art and adopts a positive attitude to overcome the intensity required for each painting. This is exceptional for a child her age,”

shared Ms Candice Yong, who has been training Ashley for almost three years.

On her inspiration for this collection, Ashley shared:

“I like to tell stories of how my day was and what I’m thinking about, and the feelings are captured when I paint. This makes each painting different because the stories are different. The colors are also unique because sometimes it’s difficult to mix and get the same color.”

The paintings are also inspired by Ashley’s family trips, like when she experienced a change in season whilst driving through snow in Queenstown, New Zealand in 2013.

Ashley staged her debut exhibition at age 7 and has since raised funds for several children charities such as the Singapore Children’s Society, The Straits Times School Pocket Money Fund (ST SPMF) and The Business Times Budding Artists Fund (BT BAF).

Ashley hopes to raise $30,000 in her second exhibition for two children charities – ST SPMF, which disburses pocket money to children from low-income families to help them through school, and BT BAF, which provides fully-sponsored arts training for young people from financially-disadvantaged backgrounds.