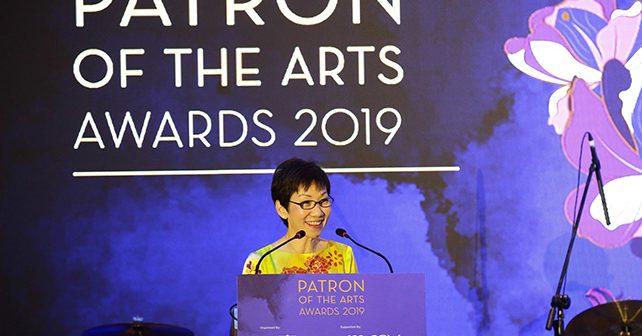 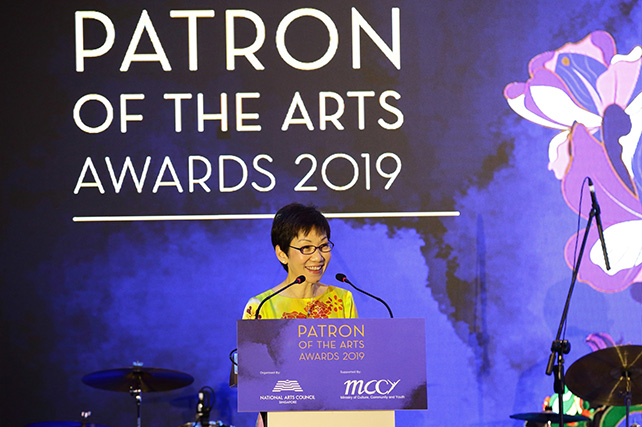 The 2019 Patron of the Arts Awards ceremony and dinner honoured 383 patrons who gave to the arts in 2018 – one of the highest in the history of the Awards. At the annual event organised by the National Arts Council (NAC), Minister for Culture, Community & Youth, Ms Grace Fu, conferred awards to 101 organisations and 282 individuals.

The 2019 Awards is the 36th edition and recognised contributions made between 1 January and 31 December 2018. During this period, patrons contributed a total of $57.4 million, comprising $32.9 million in cash and $24.5 million in-kind to grow and nurture Singapore’s arts scene. In-kind giving especially, was at an all-time high in 2018, with donors looking to support the arts by providing professional services and partnerships.

Minister Fu said in her speech at the Awards ceremony that NAC will be working on an initiative that will help arts groups looking to grow philanthropic support. This new initiative will provide short-term support through impactful programmes and by equipping arts groups with the skills to sustain their work and fundraising efforts. NAC will be engaging potential donors and beneficiaries in the development of this initiative, which will be launched in the first quarter of 2020.

This year’s Patron of the Arts Awards recognised many forms of arts philanthropy, including a wide-range of in-kind contributions that led to an almost 70% increase in such contributions in 2018, and strengthened the support network needed to grow a dynamic arts ecosystem.

One such example of in-kind giving is the Orchard Turn Developments’ ION Art Gallery in ION Orchard mall, which welcomes artists to showcase their works. The mall has also hosted arts and culture exhibitions such as a ceramic art show by Chinese ceramist Zhu Wen. Orchard Turn Development’s commitment to showing art in its spaces and to growing accessibility and public appreciation of art will help to build a sustainable arts scene in the years to come.

The unwavering support of long-term patrons such as United Overseas Bank Limited, a Distinguished Patron of the Arts for 15 consecutive years, and M1, a loyal and dedicated supporter of the arts since 1997, was also recognised. The commitment of these long-term arts champions has played a key role in the sustained development of Singapore’s arts scene.

Over 100 organisations and individuals were also honoured as first-time patrons this year, including Mr Tsai Eng Rung who generously supported aspiring artists presenting works at the Singapore Art Week and Dato’ Noor Azman Bin Mohn Nurdin, who gifted an art piece to the Singapore Art Museum. With sustained and growing support in Singapore’s arts sector, arts patronage signifies the importance of cultivating arts appreciation and ensures the continuity of different art forms in Singapore.