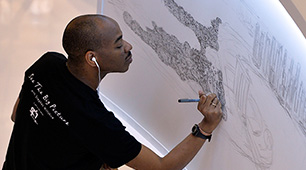 Many artists have their own success story to share, but Stephen’s journey remains unforgettable. Born and raised in London, United Kingdom, to West Indian parents, Stephen Wiltshire is an artist who draws and paints detailed cityscapes of iconic cities around the world from memory.

At the age of 3, Stephen Wiltshire was diagnosed with autism. Completely mute as a small child, he faced social challenges and found it difficult to relate to people – he was completely in his own world, till he discovered the language of drawing. His first word was “paper” when his instructors took away his art supplies, just like Picasso himself. 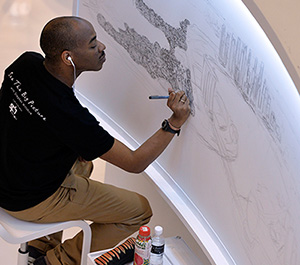 He didn’t learn to speak fully until the age of 9. But he sold his very first drawing of Salisbury Cathedral to the late Prime Minister Edward Heath when he was just 8. A few years later, Sir Hugh Casson, a former president of London’s Royal Academy of Arts, referred to him as “possibly the best child artist in Britain.”

His talent has allowed him to travel the world and sketch the skylines of major cities such as London, New York, Shanghai, Tokyo and Hong Kong. Every pit-stop he made, Stephen is sure to translate what he sees into his sketches. The prodigious savant has been blessed with the extraordinary talent for drawing entirely from memory just by looking at the subject once. That includes reproducing the littlest of details in the subject down to the exact style of windows on a building.

Stephen’s growing appreciation and desire for art eventually brought him to Singapore. After an hour-long helicopter ride to view Singapore’s skyline, Stephen spent five days drawing the city on a 4m x 1m canvas in full public view at the main atrium of Paragon shopping centre in July 2014.

The Singapore skyline artwork was commissioned by Singapore Press Holdings (SPH) and was presented to President Tony Tan Keng Yam on 9 September 2014 as a gift to Singapore for its 50th birthday next year. Along with this permanent masterpiece, prints of his ink illustrations of some of his favourite cities are currently displayed at the Singapore City Gallery.