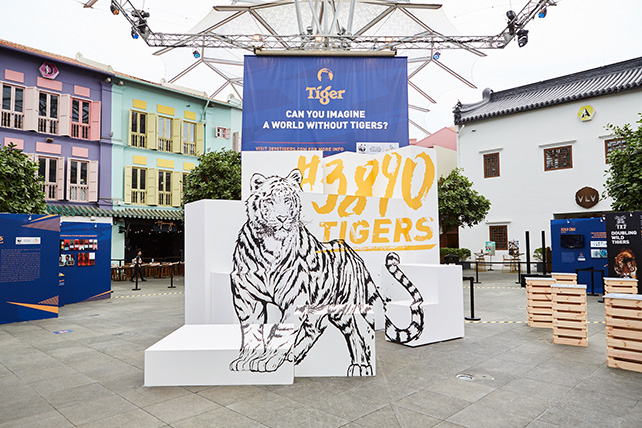 Tiger Beer and WWF are inviting people around the world to help fight illegal tiger trade and be part of 3890Tigers, a digitally-led campaign that uncages art and creativity to raise global awareness of the plight of wild tigers.

Wild tigers are globally endangered; their numbers have dropped 96 per cent in the last century from an estimated 100,000 to as few as 3,890 today. Illegal tiger trade is one of the main reasons why tigers are disappearing. More than a hundred tigers are killed each year and their parts sold for profit through international criminal enterprises. Every part of the tiger, from skin and bones, to whiskers and teeth, is exploited and used to make products such as medicine, ornamental accessories, and textiles. Today, illegal tiger trade and the wider problem of wildlife trafficking reaches an estimated USD20 billion* per year.

The 3890 Tigers exhibition will open to public from 31 May – 4 June at the Central Fountain Square in Clarke Quay. Art and creativity make up the cornerstone of the showcase, offering a visual showcase of the artistic journeys of the six 3890 Tigers artists, and the creative force formed with Tiger Beer and WWF to raise awareness and use art as a weapon to fight illegal tiger trade. the centrepiece is a one-of-a-kind anamorphic art piece that exemplifies the volatility of the wild tiger population and rate of which they are disappearing. 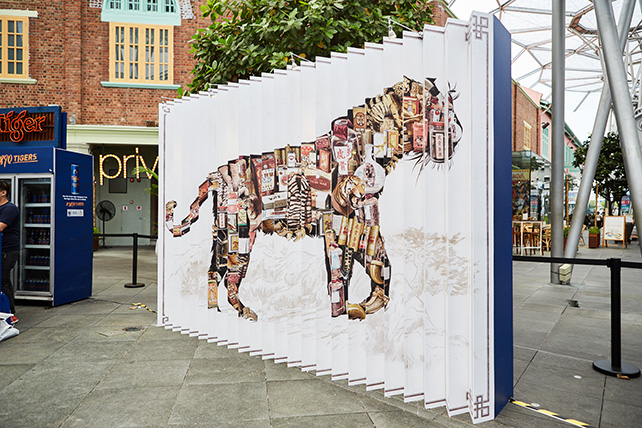 To be part of the movement, the public can visit 3890Tigers.com to upload a selfie and choose an artist to collaborate with to instantly create a one-of-a-kind selfie art generated by AI. Whether it is enigmatic street-art-meets-calligraphy, delicate paint and ink illustrations or fluttering rainbow origami, people can choose from the artistic styles of China’s Hua Tunan, France’s Mademoiselle Maurice, Malaysia’s Kenji Chai, Russia’s Nootk, UK’s Nick Gentry or USA’s Tran Nguyen to create their selfie art.

By sharing these selfie art on social networks with the hashtag #3890Tigers, the global community can pledge to help fight illegal tiger trade and help stop demand for products with tiger parts.
Speaking about the opportunity to use his craft for the cause, artist from the UK, Nick Gentry, adds, “As humans have become increasingly absorbed in the wonder of technology, we have now arrived at the moment where we urgently need to rediscover our connection with nature. Let’s use art and technology as a force for good, to uncage creativity and inspire each other to care for the environment that we have the privilege of sharing with these beautiful animals.”

To drive home the urgency of the situation, the iconic beer from Asia will also be removing the tiger from its logo and introducing a limited-edition design on select packaging without the iconic tiger for the first time in 84 years, symbolising the threat of wild tigers disappearing.