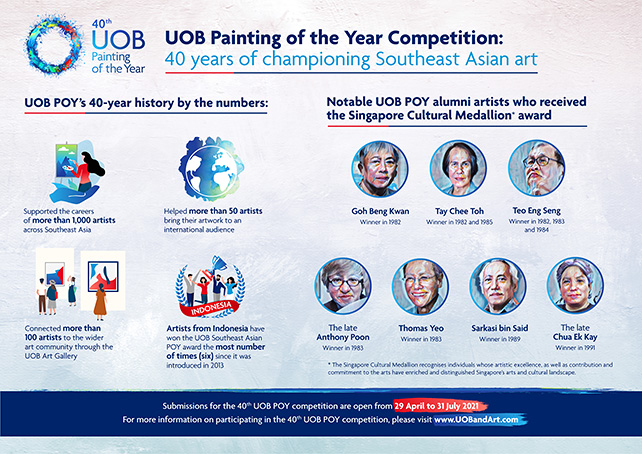 UOB is calling for artists in Singapore, Indonesia, Malaysia and Thailand to push the limits of their imagination and ingenuity through the 40th UOB Painting of the Year (POY) competition. This year, Singapore’s longest-running annual art competition and one of Southeast Asia’s most prestigious art awards invites artists to create artworks that showcase their creativity and mastery.

The UOB POY competition has helped to uncover more than 1,000 artists across the region over the last four decades. Many have gone on to define Southeast Asian art including Mr Goh Beng Kwan, Mr Anthony Poon and Mr Chua Ek Kay, who were also recipients of the Singapore Cultural Medallion. The country winner of the 2010 UOB POY (Thailand), Ms Pannaphan Yodmanee, has also gone on to win the distinguished Benesse Prize, the official award of the Singapore Biennale, in 2016.

As with last year, submissions will be received digitally. UOB POY submissions will be open from 29 April 2021 until 31 July 2021. The competition is for citizens and permanent residents across Singapore, Indonesia, Malaysia and Thailand. The winners, which include the regional winner of the coveted UOB Southeast Asian POY award for the country winner with the most outstanding work, will be announced at an awards ceremony in November 2021. More competition details can be found at www.UOBandArt.com.

To mark the 40th UOB POY, this year, instead of one country winner, all four country winners will be able to participate in an art residency programme either in Shanghai, China or Fukuoka, Japan. The month-long exchange programme will enable artists to immerse themselves in the art culture of the host country and learn about various approaches to art creation.