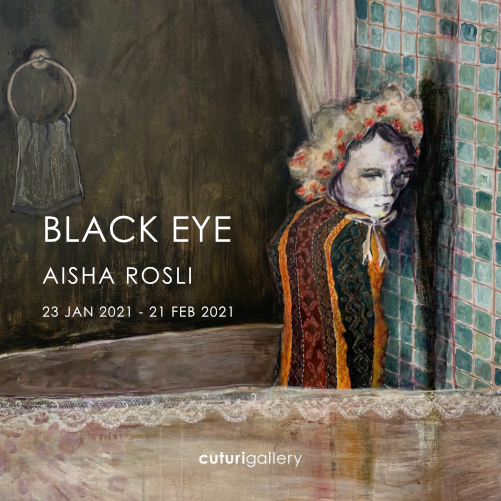 Cuturi Gallery is proud to present Black Eye, the highly anticipated solo exhibition by Aisha Rosli (b. 1997, Singapore). In this ongoing series of works, Rosli conveys and gives form to the complex and weighted sense of being, laying bare an intimate lens into her exploration of the human condition and experience.

Referencing 20th century painters Francis Bacon and Egon Schiele, as well as contemporaries such as Marlene Dumas, Rosli works within the tradition of figurative painting, driven by a mode of interrogation affixed to our bodily presence. Exploring themes of solitude, concealment, proximity and desire, she presents figures inhabiting constructed scenes and situations that pander towards the uncanny. Rosli primarily works with acrylic and oil sticks, where her tendencies to layer and glaze her paintings comprise multiple iterations of concealing and revealing states of mind apropos one’s physicality. She is known for incorporating recognisable stylised patterns such as stripes, gingham and lattice into her paintings, which serve as an important device for her to anchor the uncanny in and around her characters. To this end, Rosli’s figurative manifestations dwell in obscure environments that appear curiously familiar, yielding a certain enigmatic quality to unpacking her psychologically charged works.

In Black Eye, Rosli touches on the aftermath of ambiguous situations implicated in the appearance of a black eye, relating to multiple scenarios insinuating states of distress, anxiety, insomnia. Appearing solitary and detached, the figures emanate a sense of numbness that is both self-contained, yet emanative through to the deceptively recognisable chambers they are confined in.

Each immersed in their own private world, these characters collectively map a mindscape of sorts, weaving a mental landscape of inner thoughts and musings that transpire within one’s own mind. They abscond the viewer’s direct line of sight, retreating into their inner sanctum to reveal contemplative states. As such, Rosli provokes the viewer into traversing this visual terrain spanning various windows into the private moments and situations that these figures are engaged in. Rendering it both inviting and unsettling, the viewer then often finds himself implicitly placed in a position of stealing illicit glances at these cloistered figures, towards piecing together the different visual elements found in Rosli’s detailed compositions that hint at narrative.

Set in a dreary room, Bad Habit (2020) shows a contorted figure tightly clasping a pillow, and whose face appears illuminated under the warm glow of a sole lightbulb. Gazing downwards, the hunched figure leans over the pillow, and is pretzeled into a stiff stance with her outermost leg reminiscent of an obelisk, almost bordering a sense of monumentality. Such rigidity persists in tension as Rosli plays with a mixture of repeated motifs and textures surrounding the figure, as seen its floral garb, the geometric prints of the pillow, and the tiled floor. Rosli then leads our gaze to the lone figure, and appeals to the enigmatic in distilling her ruminative posture brought about by an unresolved situation.

In a similar vein, Rosli presents a figure with an averted gaze, reposed on a couch in Blue Velvet (2020). Set against a backdrop of repeated motifs arranged in grid pattern, Rosli foregrounds the reclining figure on a couch of blue velvet upholstery, draped with a chintz throw. The figure lounges in a poised manner, maintaining a degree of aloofness and composure that hints at an effort towards keeping up such appearance. Displaying her body in full view, she appears self-possessed, one that is in stark contrast to the holed up figure in Bad Habit (2020). However, layers of paint reveal a bruised eye that betrays her inscrutable countenance. A bruised eye; a missing shoe; and a placid aura naturally invites the viewer to wonder about the preceding encounter that the figure had found herself entangled in.

In Jealous Guy (2020), Rosli highlights two figures in their abode extending across a diptych. Confined within a single panel, a woman is shown from torso down with her legs propped up on a cabinet, alongside a man in the adjoining room, who appears to be peering through the wall, bordering the act of voyeurism. The scene remains vague as his view is seemingly obstructed by both the wall and a hung painting. Unbeknownst as to whether the woman is aware of his unsolicited gaze, her nonchalant posture nonetheless evokes a certain blasé about the male’s lascivious behaviour, and brings their relationship dynamics into question. Here, Rosli introduces elements of geometric and floral patterns to enframe the uncanny. Us looking in; him observing her, the cross-sectional plane and translucent portière augment the multiple layers of viewing embedded within the work, one that parallels Rosli’s working method of concealing and revealing through painting.

Together, Black Eye hinges on a shared vulnerability that takes the complex field of human emotions as a point of departure into unravelling and relating to the disposition of Rosli’s characters, and vice versa.

Born in Singapore, Rosli graduated from the Nanyang Academy of Fine Arts (NAFA) with a Diploma in Fine Art (Western Painting) in 2008. As of last year, Rosli was part of the inaugural roster of artists under c/discoveries, a programme dedicated to supporting young emerging artists helmed by Cuturi Gallery. Her work has since been featured in exhibitions at Sangkring Art Space, Yogyakarta (2018); Coda Culture, Singapore (2019); Cuturi Gallery, Singapore (2020); Unit London, London (2020); and Art Agenda, Singapore (2021).