Alex Seton | Once There 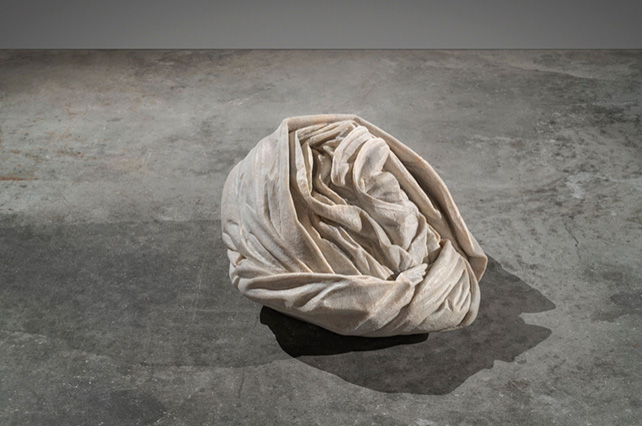 Sullivan+Strumpf is pleased to present Once There – a new solo exhibition by Australian multidisciplinary artist Alex Seton.

Seton’s second solo exhibition in Singapore, Once There is part of an ongoing series of works that sees a continuation of his distinguished study of marble carvings. This series foregrounds fabric as clothing and covering and examines its capacity as visual allegory of our common humanity and virtue.

The works in Once There are dust cloths from Seton’s own studio, bundled and thrown on the ground, not covering nor ‘containing’ any object underneath. Defrocked of grandiose aspirations, the fabric itself becomes the subject, forcing a plainer reading and contemplation of human impact, production and our ever-expanding relationship with the material world.

“Carved fabric is a long-standing tradition in stone sculptures. Its folds and draperies were not only rendered theatrics, but also somatic covenants and signifier of identity and cultural status. The gossamer shroud in was persistently used as a veil over a subject to denote grander metaphorical concepts, such as purity, death, glory and the afterlife,” said Seton.

The exhibition follows Seton’s 2018 solo show at Sullivan+Strumpf Sydney, Cargo, which featured carved representations of a seven-year accumulation of his own clothing into bales, much like that of the second-hand clothing industry. Furthering this exploration in Once There, each drop cloth has been named after some of the first garments from the ancient Egyptian, Greek and Roman periods to be carved in stone (such as a Tarkhan, Peplos or Himation) – a homage to Seton’s earliest influences.

Once There concludes a successful year for the artist who was recently awarded the Mordant Family/Australia Council Affiliated Fellowship at the American Academy in Rome.