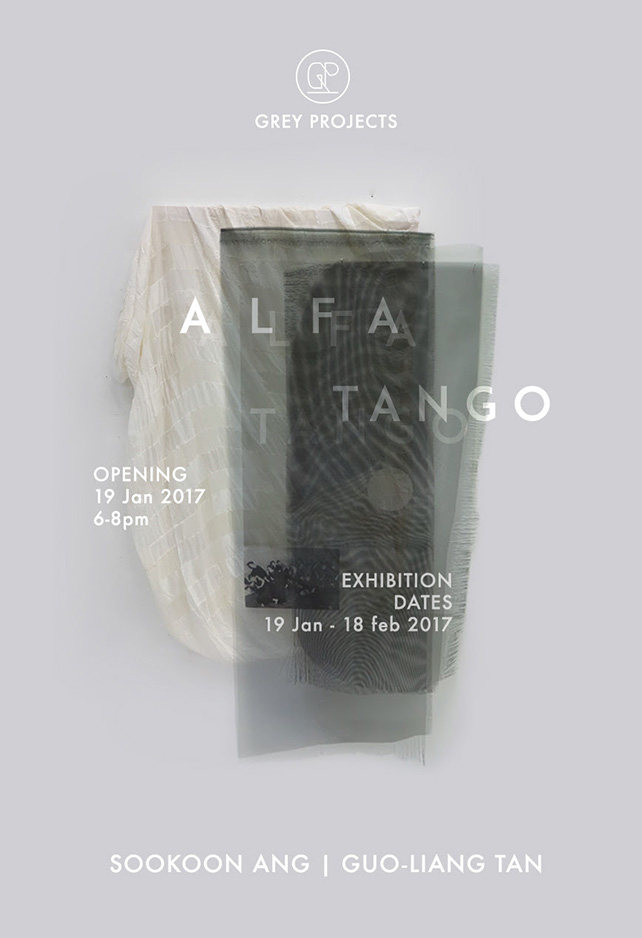 The exhibition Alfa Tango takes its cue from the initials of the artists’ surnames, expressed in the codes of radio operators. Alfa Tango hints at the way the artists’ material interests, concerns and sensitivities find correspondences across the distances they live and work in, as well as a mutually appreciative friendship. Sookoon lives in Paris while Guo-Liang spent his most recent years in Glasgow/Frankfurt.

The syntax of dance in Tango describes the interplay in the exhibition between two equals, and the contrasting rhythms and points of emphasis between them. The exhibition palate is deliberate constrained to monochromes, in part a response to Grey Projects’ unique properties, and in part to accentuate these contrasts. The exhibition features all new works: two large fabric works by Sookoon Ang, as well as a video and four fabric collages by Guo-Liang Tan. Hands grasping and in slacked release, bodies in both collective and solo movement echo as image and subject in both artists’ works. The tremulous grid in Ang’s wall-mounted fabric suggests brickwork but also musical scores and film strips, while the frequent reference to song and the knots and rings in Tan’s video point to the entanglement between space and sound. With these works, the artists offer two distinctive approaches to the place of the lyric, as well as to the syntax of circularity and recurrence.