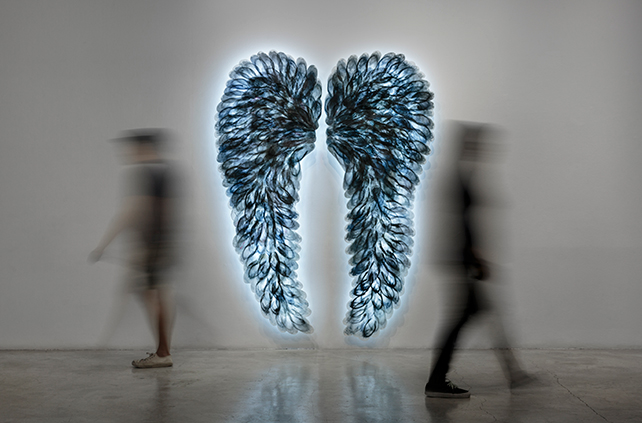 ‘Of Fragments and Impressions’ is a ground-breaking exhibition staged by STPI and award-winning Brisbane- and Manila-based installation artist duo Alfredo and Isabel Aquilizan in conjunction with STPI’s 15th anniversary.

Impressive in scale and pivotal in its undertaking, the extensive oeuvres see the prolific artists breaking new frontiers by transforming fragments of their widely-acclaimed temporal installations into permanent material works for the very first time. From a sweeping installation of cardboard pulp and steel metal rods, to gritty shanty town houses constructed with compressed cardboard, to spectacular large-scale cyanotype collages of wings, the artists turned the STPI gallery into a stellar showcase which embodies their decades-long practice.

Fragments after In-Habit, a new series of collagraphs, reuses squashed cardboard from a 2012 collaborative artwork which toured around Australia for three years and travelled to Japan, where visitors created cardboard dwellings that were assembled onto the original work. The sickle and slippers motifs in their Left Wing and Wings series extend from significant ephemeral works such as Belok Kiri Jalan Terus (2015) and Wings (2009), which reflect the complex social realities facing agrarian communities and draw reference to countries with leftist political histories. Lastly, the Northwind series follow the trajectory of the artists’ early works in the late 90s, demonstrating the universal longing of homesickness and separation. 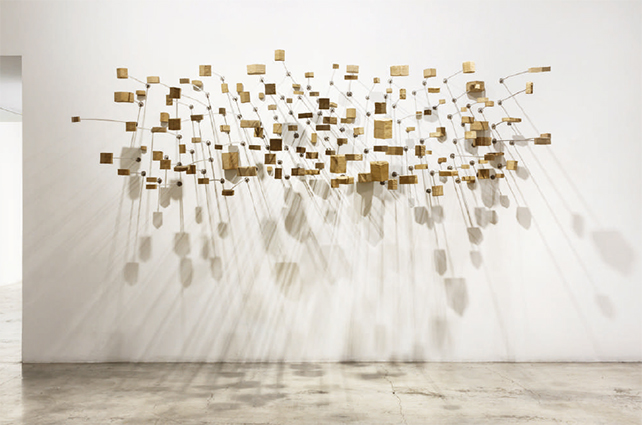 A milestone achievement, these outstanding works chronicle the artists’ personal history and are triumphant testaments to their artistic breadth.

Alfredo Juan (Philippines, 1962) and Isabel Aquilizan y Gaudinez (Phillipines, 1965) are currently based in Brisbane with their five children. The artist-duo’s collaborative activities evolved within the spheres of family and community, including personal relationships and those they share with other artists. For years they have been exploring the meaning of ‘home’ and a sense of ‘belonging’ while travelling extensively for work, finding and defining the notion of ‘identity’, dealing with hardships of journey, displacement, sensing presences in absence and accumulating memory. They continue to process these issues through materials and objects that are both abstract and referential, objects that serve as metaphors of everyday human life. For the past ten years they have continuously collected fragments of their protracted Project Be-longing (1997-2007), an artistic collaboration spanning ten years. They are currently working on a new project entitled Another Country that talks about migration, dislocation, diaspora, adopting/adapting, settlement/resettlement, and identity.