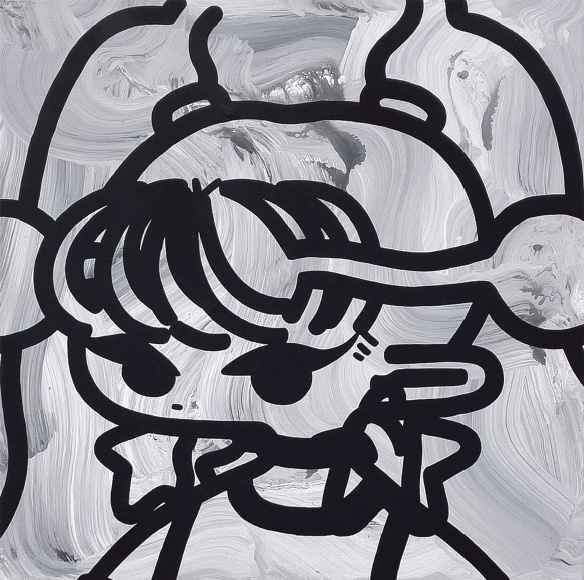 Do aliens have pronouns? This is a question that polite society of present day Japan would refrain from entertaining. Growing up in cosmopolitan Tokyo presented a surprising challenge to SIMON’S imaginative curiosity. Raised by a single father, SIMON was left to his own devices from an early age and found it difficult to relate with schoolmates who often teased him for having feminine sensibilities. SIMON’S aptitude for painting became his primary outlet of self-expression, and, as fate would have it, his father’s best friend who identified as transgender became an ally to SIMON throughout the process of refining his creative practice into an art form.

The cuteness of SIMON’s aliens contain a teachable shadow. In the manufacturing industry, for example, the psychology of cuteness derives beyond aesthetics insofar as it is deployed to attract an individual by eliciting obsessive attention. At the macro level, aggressive aspects of so-called progressive culture inculcate dogmatic fixation with surface features that, perhaps antithetically, result in alienating humans from one another. Aliens of SIMON’s universe are not limited by gender or physical characteristics and seek to benefit anybody who feels marginalized in the broader context of societal relations. SIMON conveys how the word ‘Alien’ may be re-appropriated to acknowledge our inherent capacity for Love, aligning Ego with Self- Esteem.

The characters brought to life by SIMON’S brush are more than “super kawaii!” they represent the heart and spirit of a sweet, sensitive artist whose talent and capacity for friendship saved his life.