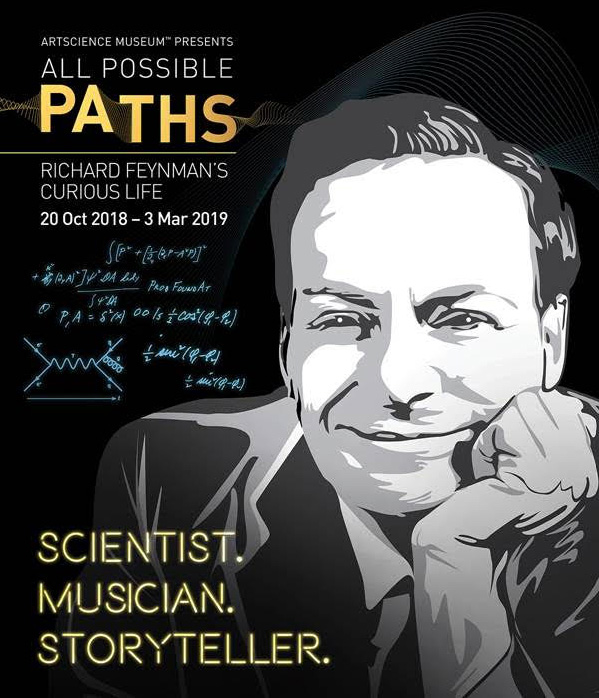 The brilliant and multi-faceted life of Nobel Prize winning physicist, Richard Feynman, will be showcased at ArtScience Museum in a brand new exhibition to be unveiled on 20 October.

Curated and produced by ArtScience Museum, in collaboration with Nanyang Technological University, Singapore (NTU Singapore) and Nobel Museum in Sweden, All Possible Paths: Richard Feynman’s Curious Life celebrates the extraordinary achievements of Feynman. It is developed to mark Feynman’s centenary, which is being celebrated around the world this year, with conferences and festivities, including a major scientific conference, Richard Feynman at 100 (22 – 24 October), at NTU.

All Possible Paths will show how Feynman contributed to our understanding of the mechanisms of the universe, through his pioneering work on quantum mechanics. Feynman was known for his work in quantum mechanics, the basis of modern physics, and for many technological advances that now support our everyday lives.

While Feynman is best known for his work in physics – receiving a Nobel Prize in 1965 – the exhibition also highlights how his curious nature and unconventional thinking drove him to explore many possibilities in life, including art and music.

“ArtScience Museum is delighted to present, All Possible Paths, a new exhibition, curated in-house by our team, working in dialogue with NTU and Nobel Museum. It marks the centenary of one of the most influential physicists of the 20th century, Richard Feynman. Far from being a traditional biographical exhibition, All Possible Paths uses both art and science, as well as striking contemporary design, to convey the importance and relevance of Feynman’s work for today’s audiences. In the centre of the show, installations, sculptures and immersive environments created by contemporary artists will take visitors deeper into Feynman’s science through the medium of art. This is a unique show, celebrating a unique figure in science, and we are excited to launch it, in tandem with the Richard Feynman at 100 conference, which will bring world-renowned scientists and Nobel Prize winners to Singapore,” said Honor Harger, Executive Director of ArtScience Museum.

“It could not be more appropriate that ArtScience Museum in Singapore produces this wonderful exhibition on Richard Feynman’s work. During his lifetime, Feynman was a world famous physicist, but he was also deeply involved in art. Feynman moved between fields in a very natural and inspiring way. He is a source of inspiration for generations of young scientists and the way he enlarged his intellectual territory by involving himself in activities such as painting and music should be a role model for all of us. The Nobel Museum in Stockholm is very proud to collaborate with ArtScience Museum – a unique institution in the world – on this project,” Dr Olov Amelin, Museum Director of Nobel Museum.

All Possible Paths will also showcase a collection of Feynman’s personal items, documents and letters, on loan from institutions and individuals from around the world.

More than 10 eminent scientists from all over the world will also converge at Richard Feynman at 100, a three-day conference held on NTU’s campus from 22 October. They will be sharing their thoughts on Feynman’s contribution to science and society, and on the importance of innovation and translational research excellence in academia.