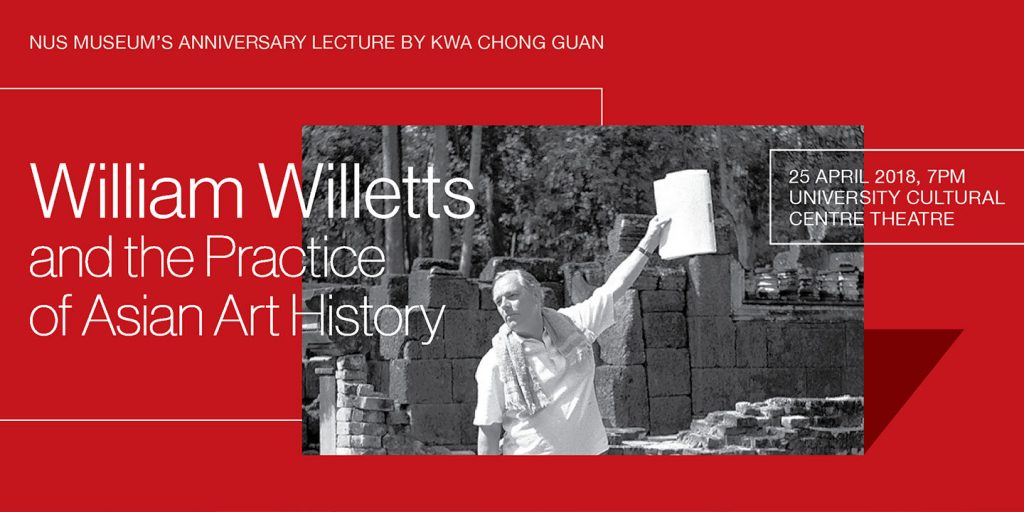 As part of the NUS Museum Anniversary Lecture Series, Kwa Chong Guan will deliver a lecture on William Willetts, his contributions to scholarship, museum practice and the broader regard for cultures in Southeast Asia in Singapore, through which perspectives into the roles of the museum and the curator lodged within a university institution may be drawn, and prospected across periods and contexts.

Kwa Chong Guan recently co-edited with Dawn Rooney a long lost guide to Angkor by William Willetts for the Southeast Asian Ceramic Society. He was the last Director of the National Museum, leading it through a strategic planning process to transform it into three museums under a National Heritage Board in 1994. He continues to advise NHB’s museums, and was consulted in the formation of the Singapore Discovery Centre, the Army Museum of Singapore, and the Malay Heritage Centre. He also reorganised the Oral History Department, and was the Chairman of the National Archives Advisory Committee. He is a Senior Fellow at the S. Rajaratnam School of International Studies at the Nanyang Technological University, where he works on a range of regional security issues, Adjunct Associate Professor (Honorary) at the History Department at the National University of Singapore and an Associate Fellow of the Nalanda-Sriwijaya Centre at the ISEAS-Yusof Ishak Institute.

Peter Schoppert began his career writing on the visual arts, and has written for newspapers, magazines and journals like Far Eastern Economic Review, The Straits Times, Art Asia Pacific, and Inter-Asian Cultural Studies. He has worked in book and internet publishing in Singapore since the 1980s, for Times Publishing, Editions Didier Millet and now NUS Press. He did a stint with McKinsey & Company, and is currently President of the Singapore Book Publishers Association. He recently served a three-year term as Chair of Singapore’s Public Art Appraisal Committee. He was on the Board of the Substation, Singapore’s first independent arts centre, from 2006 to 2014. He was one of four editors for the recently released Writing the Modern: Selected Texts on Art & Art History in Singapore, Malaysia & Southeast Asia, by T.K. Sabapathy.