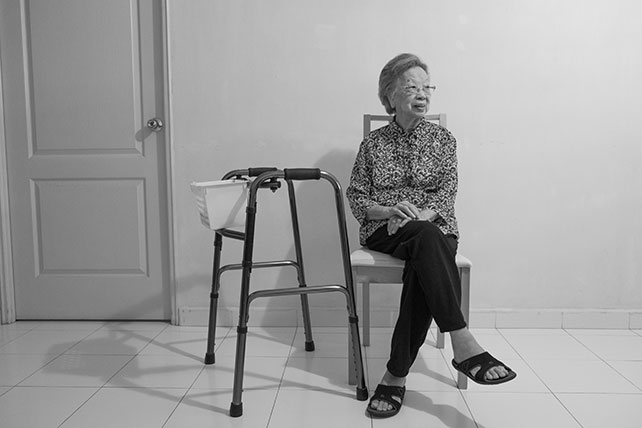 From 23rd to 30th November 2017, Here\Now @ SPRMRKT Daily will display At Ease, an image handpicked by its creator, photographer with special needs Isabelle Lim, from her photo essay titled Living with Grace.

The Living With Grace photo essay was inspired by her 96-year-old grandmother’s resilience and showcases her unseen strengths of self-reliance, determination and ability. Created in collaboration with her cousin Tham Yin May, this project was a way for them to preserve memories of Old Mama. The process has drawn Isabelle closer to her grandma despite their language barrier – she being deaf and grandma who speaks only Teochew. Seeing her grandmother with new eyes, Isabelle believes her grandmother is a prime example of living with grace and stoicism, even in old age.

At Ease, in particular, reflects how living well physically and mentally can become increasingly difficult. As one ages and our faculties are affected towards the end of life, living the later years with solitude, grace and simple contentment is worth celebrating.

The elderly, much like the disabled, are often stereotyped as infirm and helpless. Through this profound though unspoken correlation, the photo essay aims to shed light on people with special needs and their abilities to live meaningfully. The full photo essay will be projected alongside At Ease as a silent video loop.

This exhibition is running concurrently with the second instalment of SPRMRKRT’s community and social support initiative Dining With A Conscience, which both features and supports Isabelle Lim in her artistic and career goals.

DINING WITH A CONSCIENCE FUND-RAISING DINNERS
This year’s instalment of Dining With A Conscience by SPRMRKT aims to strengthen appreciation of the ability of people with special needs to live meaningfully while heightening awareness and raising funds for the TODAY Enable Fund.
25 & 28 -30 November 2017
$188++; SPRMRKT Kitchen & Bar; Open to public