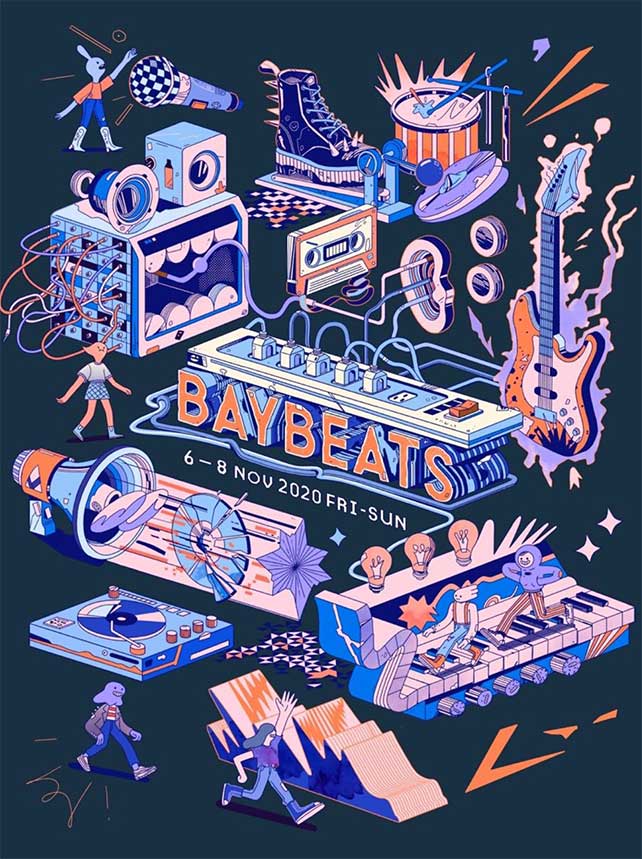 The first online edition of the festival was held in August 2020, and now Baybeats returns to Esplanade – Theatres on the Bay for an unprecedented second time this year, from 6 – 8 Nov 2020.

At a time when there are still limits to physical gatherings, the team has put together a line-up of digital programmes to satiate the hunger for Singapore indie music. The team also plans to welcome back small groups of live audiences at the centre for selected performances in line with the government’s regulations.

For the very first time, the festival will be moving into Esplanade’s crown jewel, Esplanade’s Concert Hall, and the magnificent Esplanade Theatre. From the Concert Hall, performances will be livestreamed by six Baybeats Budding Bands, who will make their debut at the festival after two months of mentorship. And against the dramatic backdrop of the Theatre’s auditorium, bands including dream pop starlets Subsonic Eye, theatrical metal band Cockpit, electronic pop sextet Riot !n Magenta and punk metal veterans Opposition Party will be livestreaming their performances.

At the Esplanade Annexe Studio, a special two-way livestreamed experience will be created. Audiences will be able to be part of an experience that comes the closest to a live gig. Heavyweights such as indie rock band Astreal, all-star group Hanging Up The Moon and hip hop stars THELIONCITYBOY feat. Amthakid and ABANGSAPAU will be performing in two-way livestreamed sets with live audiences projected on screens around the performers.

Finally, through the Baybeats Budding initiative, more of our homegrown talent will be welcomed — not only in music-making but also in other creative fields like music journalism, gig photography and video arts — into the Baybeats family.

With so much to look forward to, this November’s edition may turn out to be the most exciting and special thus far! So, grab your gear, roll up your cuffs, gather your troops and rock on(line) and onsite at Baybeats!