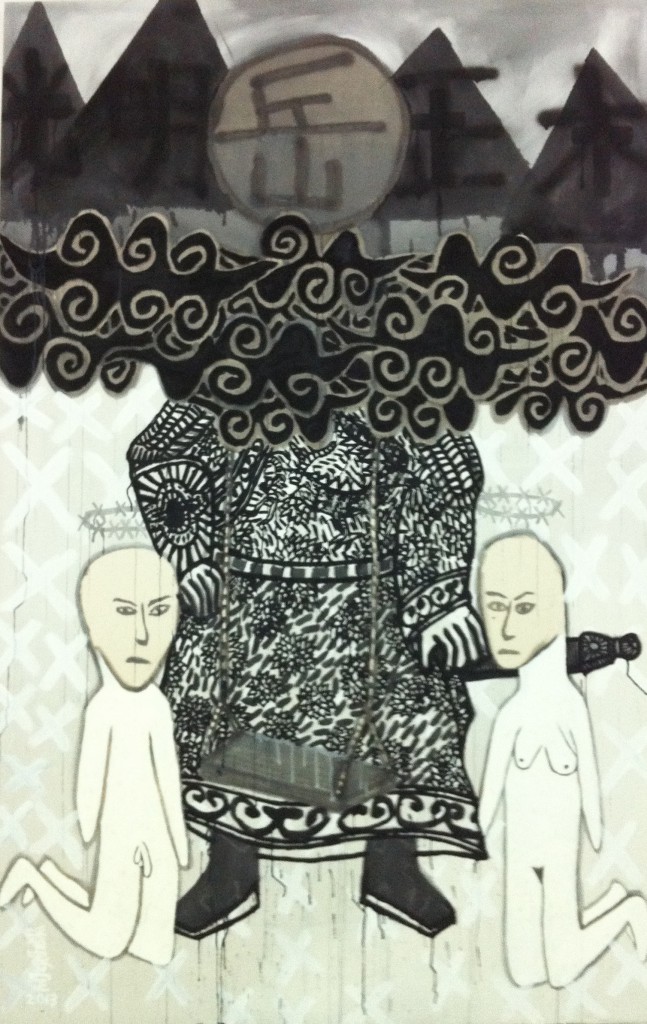 The secret harmony of disharmony: Ben does not seek to create the sophistries of reasonable images but what is torturously behind thought, the stirring live quality of ambiguity. He works in direct connection to the deepest vital substratum, a quickening pulse pushing him into action. He is only responsive to his here and now.

For this exhibition, Flaneur Gallery is proud to present 5 paintings and 2 sculptures by Ben Puah. Not unlike his peers, Ben adopts appropriation as a nexus of operation. In this series of paintings executed in 2014, he alludes to the impact of mass entertainment television diet of the 1990s – involving Hong Kong wuxia and drama serials, Chinese legends and folklores. Ben employs these imageries and characters symbolically – props specific to a visual moodscape. Partial towards the use of black, Ben exudes the same distinctive attitude as a Chinese ink painter would, wherein a monochrome system is sufficient in all its various permutation to represent his visual language and the spirit of the subject. Yet in deliberately working with acrylic on canvas, he eschews participation in the associations of Ink-and-Wash, favouring the potential of his art to serve as social commentary; bold responses to the dynamic reality, agencies and social spaces that fuel such works.

Without artifice or ornamentation, his figurative sculptures serve as a touchstone that Ben’s art is a continuous process instead of a finished work. Titled Gong-Gong (a Hokkien verb implying some parts daftness, giddiness and muddle-headedness) and BenRat, these two subjects have also been materialised on canvas, in performances, and are frequently revisited.

At the heart of this exhibition, one should not seek to understand these works. Ben does not want the terrible limitation of those who live merely from what can make sense. He invents his truth. This selection of works reflects the archetypal unease to this contemporary milieu that circumscribe Ben’s life as an artist to-date. This exhibition is curated by Elizabeth Gan.

An open conversation with Ben and Elizabeth: 4 April, Saturday, 2-3pm

Hours: Tuesday to Friday 3pm to 7pm; Saturday and Sunday 1pm to 6pm