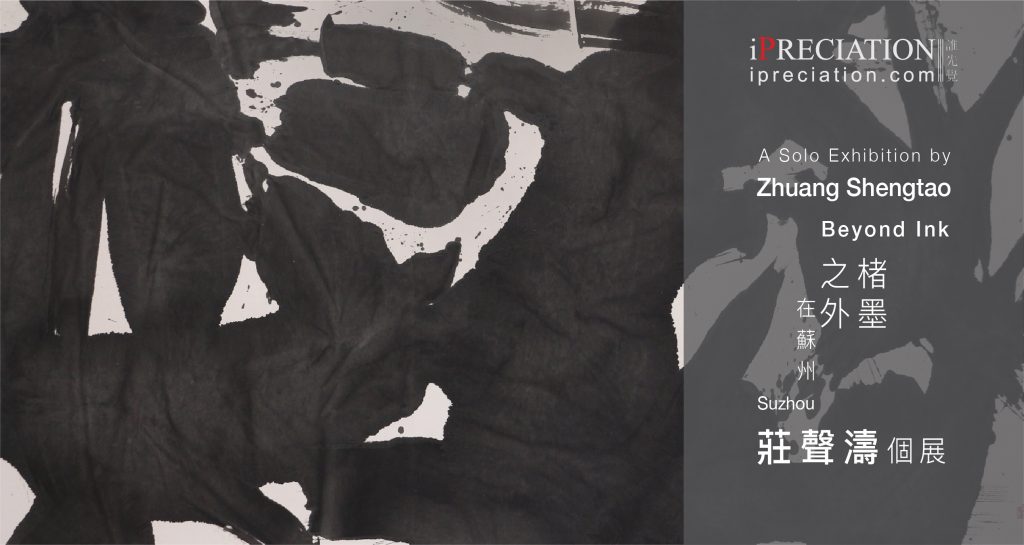 iPreciation proudly presents a solo exhibition by Singapore pioneer contemporary ink artist, Zhuang Shengtao, titled Beyond Ink – Suzhou. This exhibition showcases a series of works by Zhuang since his move to Hangzhou in 1996 and to Suzhou a year later. Basking in the historical ambience of Suzhou, Zhuang lives increasingly like a literati artist, yet with a modern twist. The ink master further pushes the boundaries of daxieyi (freehand brushwork) as he seeks to blend ancient Chinese ink traditions with western contemporary aesthetics.

As the title suggests, Beyond Ink – Suzhou highlights the contemplative nature and metaphysical resonance of Zhuang’s works as they transcend recognisable forms and are imbued with schools of thought that he is fascinated with. With a solid foundation in Chinese philosophy and Chinese calligraphy and painting, combined with his early explorations in Europe and the United States, Zhuang’s audacious, uninhibited brushwork and unconventional composition strike a delicate balance between the East and the West. As Zhuang gets progressively liberal in his swings and sways, his abstract ink series is filled with bold, thick, and blunt strokes of pigment that are deeply introspective and philosophical.

Zhuang Shengtao (b. 1944) migrated to Singapore with his family from Chao’an, China in 1955. He enrolled in foundation classes at Nanyang Academy of Fine Arts in 1964 and studied under renowned calligrapher, See Hiang To. Zhuang graduated from Nanyang University with a Bachelor’s degree (First Class Honours) in 1972 and a Master’s degree in 1977, both in Chinese Literature. In 1981, Zhuang travelled to France for a year during which he toured several parts of Europe. Zhuang headed to the United States in 1987 where he later obtained a Master of Fine Arts from the University of Washington, Seattle. In 1996, Zhuang travelled to Hangzhou, China. He has been residing in Suzhou, China since 1997.