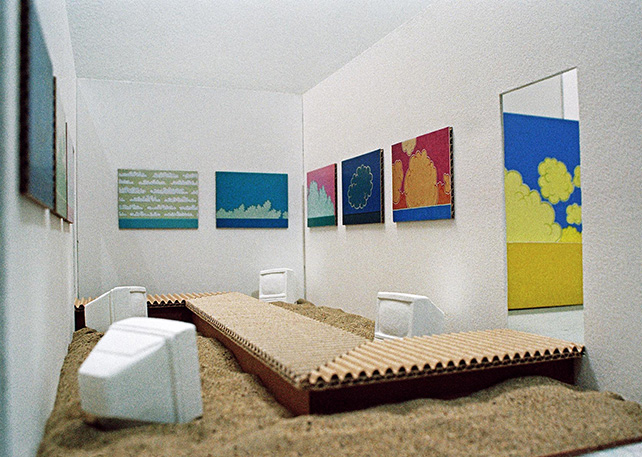 Blurring the Boundaries features Burmese artists Tun Win Aung and Wah Nu. Currently showing as part of the 5th Singapore Biennale, Tun Win Aung and Wah Nu first exhibited at Chan Hampe Galleries with a solo in 2013. They return today with the full, updated and last edition of their photographic suite Blurring the Boundaries (2007-2012). This was originally presented as a set of 7 photographs at the 6th Asia-Pacific Triennial of Contemporary Art in Queensland, Australia, and it subsequently became the national collection of Queensland Art Gallery of Modern Art, Australia. This marked the beginning of Tun Win Aung and Wah Nu’s shift in 2007 from the more formal approaches of painting and drawing. The 10 complete Blurring the Boundaries prints are now on show at Chan Hampe Galleries.

To this day, working in a less than conducive economic and political environment, artists in Myanmar work under pressure and the close scrutiny of state authorities, and they are often prevented from accessing international networks. With little to no conversational support from peers, and without access to exhibition spaces and opportunities, the Burmese husband and wife team chose to construct a dream exhibition set in manageable dimensions. Beginning with detailed and to-scale sketches of these hypothetical exhibitions, the artists later built maquettes set in nondescript gallery spaces. As a symbolic aspiration for actual exhibitions, these maquettes are then photographed, digitally filed and are only printed when an exhibition opportunity arises. These photographs, resembling maps and references of exact components of entire exhibitions become the eventual artworks.

While Blurring the Boundaries remain trapped within today’s sensitive geopolitical environment, its artists leave us with a sobering reminder:
“We agree that all these sketches and models reflect the contemporary of our own. Exhibitions of our models had no visitors and were always deserted. This solitary is our isolation and this silence is our dumbness, in half a century. These photos are the self-portraits of an artist as a motherland.”