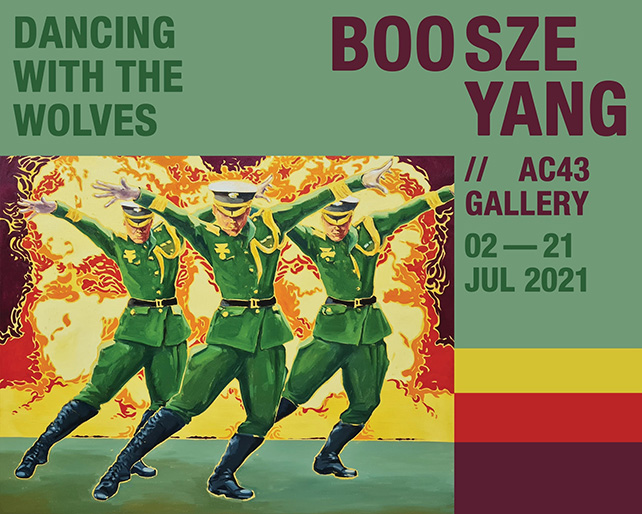 AC43 Gallery is pleased to present Boo Sze Yang’s latest solo exhibition, Dancing with the Wolves, which features over 15 oil works completed in the period of 2015-2021. The show spotlights the artist’s latest series of work, which explores the validity of Plato’s notion of an ideal society comprising people in observance of their classes and duties (producers, auxiliaries, and guardians), in contrast with Thomas Hobbes’s view on human nature as selfish and destructive. Darkly comic and brimming with technicolour theatricality, the paintings provoke viewers to contemplate the performative aspect of reality as they navigate daily through the optics that postulate as truth in today’s heightened post-truth digital era.

These works by Boo Sze Yang probes our perception of truth and reality, and projects another dimension for contemplating scenes of civic discontent and unrest that have been circulating in the global media in recent years. After studying and re-composing images of protest and punishment, Boo Sze Yang reframes the scenes through dark humour and an exaggerated theatricality, blowing up the uncanny repetition of figures, synchronised dance moves, and poster-like mise-en-scene. Each painting is titled after a well-known song that had been used in certain protest movements around the world, like “Another One Bites the Dust”, “Too Young to Die” and “Don’t Take your Guns to Town”, creating an intertextuality that enriches our imagination of the scenes and emotions beyond the visuals of his canvases.