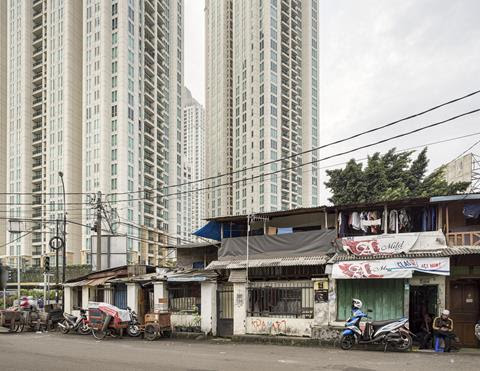 Jakarta is one of the biggest and fastest growing cities in the world. Its rapid growth in the last fifty years has not occurred without its problems and Jakartans have had to become accustomed to producing improvised strategies to temporarily solve the shortcomings and problems of the city that beset them every day. Not solving problems for good but merely as they arise, one at a time, until the next one raises its head.

Constant small scale improvisations are required to keep Jakarta functioning: often original and ingenious. A vast number of small but vital daily interventions must also be completed to keep the city in check, though these are generally inadequate and vastly disproportionate to the objective at hand.

Isidro Ramírez is a Spanish photographer now based in Singapore. After living, working and studying in the UK for 20 years he moved to Singapore in 2011. His work shows a delicate balance of what is real and what is perceived, between the fabric of place and the texture of memory.