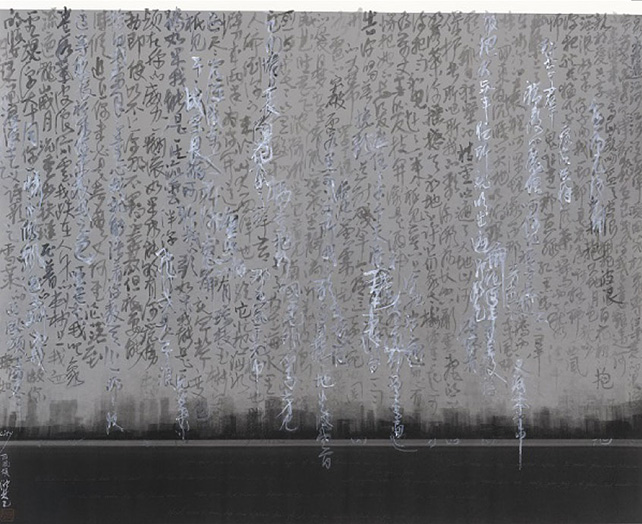 Calligraphy · Universe《書·萬物》 is the first solo exhibition in Singapore by the renowned Chinese female artist Chu Chu 儲楚. In this exhibition, Chu Chu seeks to explore calligraphy through the origins of the manifestations of Chinese characters, the evolution of which is generally described by the six-fold classification system like pictograms and ideograms, etc., which are closely connected with natural elements in our universe, her choice of subject matter in many of her works. Chu Chu seeks to incorporate the art of Chinese calligraphy into her photographic works which are uniquely printed on xuan paper. She is also deeply influenced by philosophies and classical texts. In both of her series titled Whisper of Trees and Magnolia Flower, she extracts certain portions from Chinese poems and texts that describe the relationships between human and nature, subtly incorporating them into the background of her ethereal photographs of tree branches and flowers, evoking a sense of quietude and transience. This juxtaposition of images constructed instantly from a camera, together with the carefully and slowly constructed calligraphic characters presents interesting layers of meaning, as they successfully combine two very different visual languages – contemporary photography and traditional calligraphy.

Chu Chu is a multidisciplinary artist who is accomplished in ink painting, calligraphy, photography and oil painting. She majored in oil painting at the China Academy of Art in Hangzhou, China, where she graduated with a Bachelor’s Degree in 2000. Subsequently, she attained a Master’s Degree in New Media at the academy in 2007 and a Ph.D. in calligraphy, under the tutelage of acclaimed calligraphic master, Wang Dongling, in 2015.