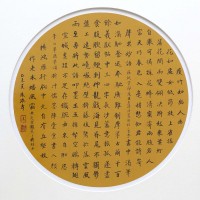 Mr. Choo has had a distinguished career in the Singapore Arts scene spanning over 20 years. Prior to his current role as the CEO of Singapore Chinese Cultural Centre (SCCC), he was the President of the Nanyang Academy of Fine Arts (NAFA) from 2003 to 2014, and served as CEO of the National Arts Council (NAC) from 1996 to 2003.

Mr Choo is formally trained in Chinese calligraphy. His love for calligraphy began at a tender age of 11, when he started by teaching himself the basic brushstrokes. He has come a long way since then, having continued his practice to hone his skill over the past 50 years, including 20 years of training under the locally renowned calligrapher, Mr Chang Sow Yam. While this is his first solo exhibition with Da Tang Fine Arts Singapore, he has previously participated in group exhibitions, and has regularly presented his calligraphy art works to close friends and family. Mr. Choo is also well-versed in and a published-writer of Chinese classical poems, producing his first collection of personal poems in 2001. Mr Choo is a unique and well-rounded calligrapher. He marries his deep knowledge in Chinese classical poems, as well as in Chinese language, history, philosophy and culture, with his masterful skill in calligraphy to produce original and meaningful calligraphy art works.