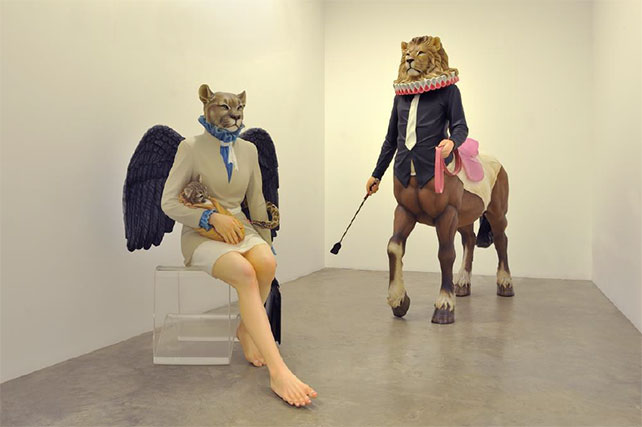 A Bachelor of Arts (Fine Art, First Class Honours) graduate of Royal Melbourne Institute of Technology, Singaporean David Chan (B. 1979) is a full-time artist who held his first solo exhibition – Genetic Wonderland – in 2004 at age 25, to much critical and public acclaim. In that year, he was also winner of the 23rd UOB Painting of the Year – Representational Medium Category Award.
Working with oil on linen, David paints in a realistic style and uses subjects such as animals, humans and animal/human hybrids against his favoured vivid background colours. At first glance, the works seem comical and bewildering, but upon closer observation, the initial impression gives way to the artist’s reality and his take on social issues such as popular culture and genetic engineering, as well as human behaviour in our current times. 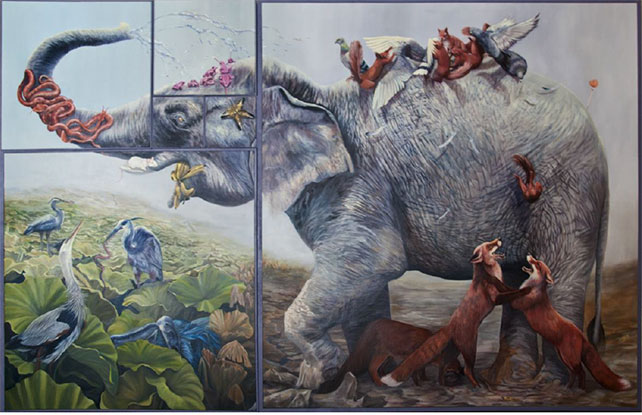 Nevertheless, while David’s works are cynical social commentary, they are hardly confrontational or aggressive in their messages and one gets a sense that his cynicism is peppered with plenty of irony and humour, much like life itself. In more recent exhibitions he has further expanded his artistic vocabulary by including sculptures. These life-like 3-dimensional works further explore his concepts and ideas creating an even closer bridge between the viewer and the artwork.

David has exhibited in Beijing, New York, Taipei, Shanghai, Korea, Indonesia and Singapore, most recently in the Singapore Biennale in 2016/2017. David artworks have been widely collected by major collectors, institutions worldwide.

Hours: Mondays to Friday 11am – 7pm, Saturday by Appointment only, Closed Sundays and public holidays.