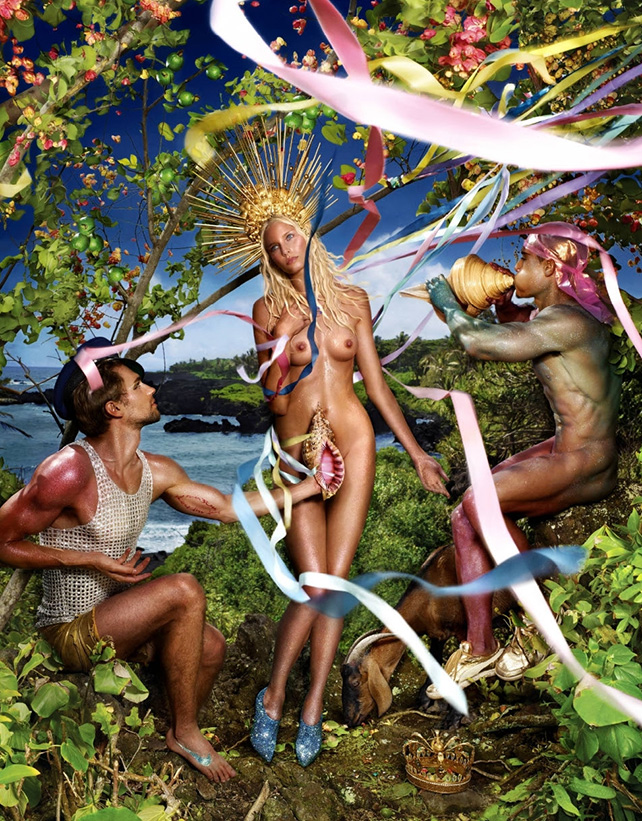 Mucciaccia Gallery exhibits twenty-seven artworks by David LaChapelle to retrace the artistic production of the great American artist. The exhibition presents artworks from his most recent series through to the 1980s, when he abandons working for high fashion magazines and other publications to pursue his interest in contemporary art.

Hawaiian atmospheres, unexpected landscapes, mythological figures and dreamy suggestions are the settings recreated in David LaChapelle’s works. The exhibition includes the monumental Kardashian family’s famous Christmas picture, Showtime at the Apocalypse (2013), Rebirth of Venus (2009), the portrait of Michael Jackson, which celebrate his media beatification, and Dynamic Nude and the only black and white photograph taken in New York Good News for Modern Man, from 1984.

A journey starting from his most recent series New World, Lost and Found and Behold, which are evocative photographs taken in 2017 in the pristine Hawaiian rainforest, dense with mysticism and spirituality, to his early pictures realised in Los Angeles. The exhibition includes his two big panels from the series Aristocracy (2014) as well.

The year 2007 can be defined as a turning point in the artistic production of LaChapelle: influenced by his visit to Michelangelo’s Sistine Chapel, LaChapelle produces the series The deluge and After the deluge. The reference to Michelangelo’s masterpiece is mixed with that of consumer society brands, generating an apocalyptic vision with a finale in which objects, works of art and people appear submerged by water, such as in Cathedral, Statue and Awakened.

The exhibition ends with a series of photographs realised between 1984 and 2009, depicting personalities from the entertainment world and Hollywood stars, including the Hollywood portrait of Faye Dunaway in Day of the Locust (1996); The exhibition will be accompanied by a complete illustrated exhibition catalogue, published by Carlo Cambi Editore.

The exhibition is curated by LaChapelle Studio and Mucciaccia Gallery