Depth of Being: Wee Beng-Chong 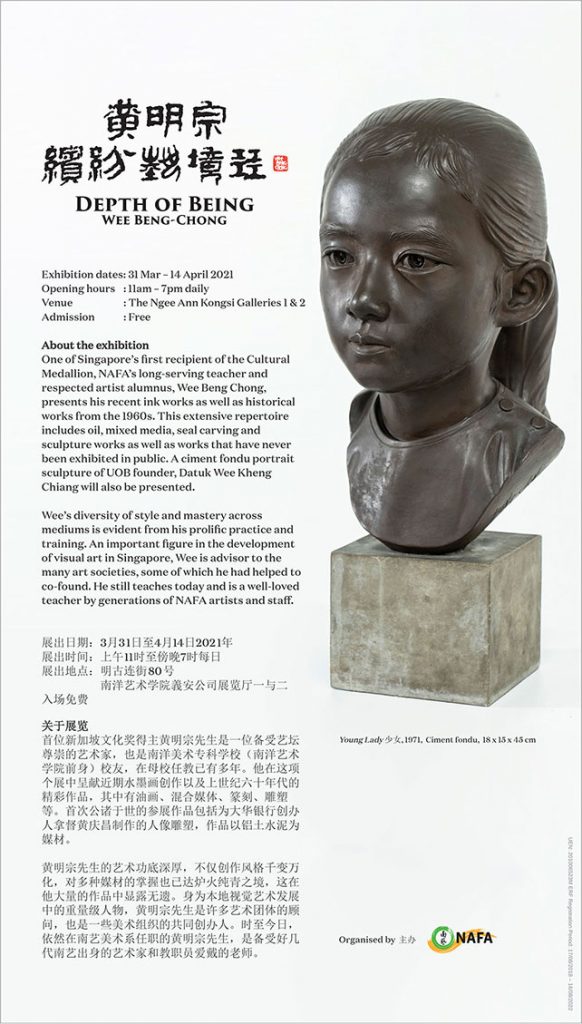 Depth of Being: Wee Beng-Chong 黄明宗缤纷艺境展 is a survey exhibition featuring sculptures, paintings, calligraphy and seal engravings from across six decades of practice and experimentation by eminent art educator and artist, Wee Beng-Chong. One of the first recipients of the Cultural Medallion since its establishment in 1979, Wee presents his 15th solo exhibition showcasing close to 70 wide-ranging works from the 1960s to 2019.

The diverse mediums and styles in the exhibition provide a lens into the versatile artist’s mastery, style and story. Highlights of the exhibition include his early works such as Backstage – Puppet Show 后台—木偶戏 (oil on canvas, 1961), depicting coloured blocks carefully arranged to reflect the lively atmosphere of the stage behind the scenes. His extraordinary sensitivity to material and mastery of sculpting led to several commissions of portrait busts for prominent people and businessmen such as UOB founder Datuk Wee Kheng Chiang (ciment fondu, 1974). Young Lady 少女 (ciment fondu, 1971) is a life-like portrait bust of a young student which skilfully exudes the personality and innocence of the subject. A selection of works which has never been exhibited in public are also featured in this extensive repertoire. Rooted in Chinese writing and Western modern art concepts, his works are bold and innovative. At 83 years of age, Wee is still learning and pushing himself to explore new possibilities with each new piece he creates.