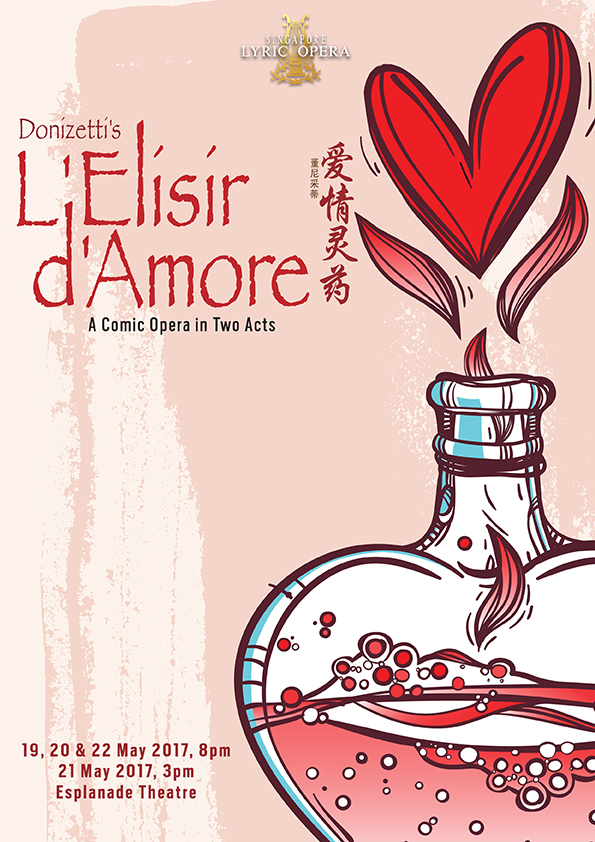 L’elisir d’amore (The Elixir of Love), one of the most beloved and frequently performed comic operettas, tells the tale of naïve village boy Nemorino who is besotted with wealthy Adina. Naturally, she rejects his declarations of love, and agrees to marry the boastful Sergeant Belcore. Fortunately, (or unfortunately) Dulcamara and his quack remedy of a “love potion” is on hand to help him win her heart!

Cited as one of his best works, Donizetti’s music features three big duets between the tenor and soprano, as well as the popular tenor aria “Una furtiva lagrima”.

The production will be directed by Tom Hawkes, who is no stranger to Singapore having helmed SLO’s productions of Carmen, Don Giovanni and Rigoletto – to name a few. Audiences can expect to be highly engaged and entertained as they go on a journey to find out if love will triumph in this downright farce.

Sung in Italian with English and Chinese subtitles, L’elisir d’amore promises smiles and plenty of chuckles in this jolly revival of merry comic routines and flamboyant lyrical arias.

Tickets are available at SISTIC.