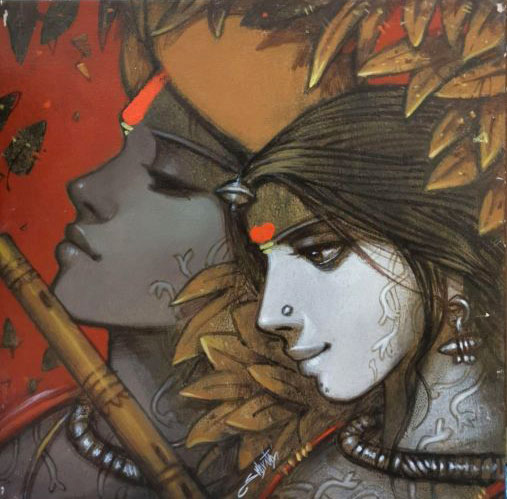 The works of Subrata Das exudes his poetic imagination and his deep interest in depicting characters from Indian mythology. His most famous series focuses on the divine love of Radha and Krishna. His canvas tries to capture a celebrated mythical love that exists beyond the mundane conjugal relationships. Subrata Das experiments with mixed media and acrylic to create a mood of mystique that surrounds Krishna and Radha, with a layer of surreal flowers and twines that intersperse these artworks.

J. Kalidass has purposefully indulged in the attempt to identify a delicate sense of spiritual synchronization, through an almost entirely personal statement in the form of visual manifestation. This, he has achieved with the help of the sculptural image of Gautama Buddha, the founder of one dynamic social, religious, spiritual, personal-political, philosophical phenomenon.