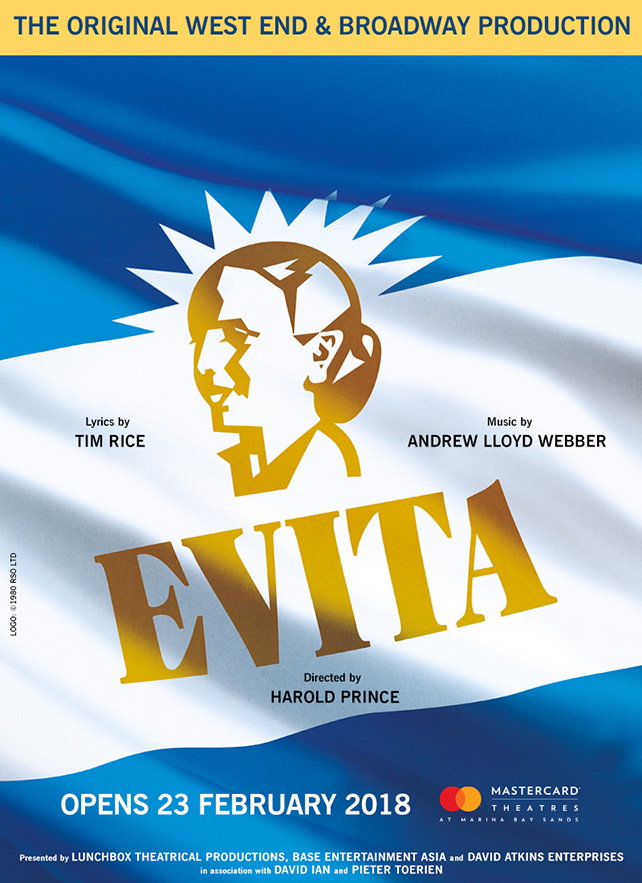 Winner of over 20 major awards, the original West End and Broadway production of TIM RICE and ANDREW LLOYD WEBBER’s iconic musical EVITA, directed by legendary Broadway director HAL PRINCE, will make its Asian premiere at The Mastercard Theatres at Marina Bay Sands this February as part of an international tour.

EVITA charts the rags-to-riches rise of the First Lady of Argentina, who won the love of her country after marrying military leader-turned-president Juan Perón. Set in Buenos Aires between 1934 and 1952, the musical follows Eva Duarte Perón on her passionate and tragic journey from her humble beginnings as a fatherless child, to ambitious actress, to the most powerful woman in Latin America, and eventually to a saint-like figure after her death from cancer at the age of 33.

For decades, EVITA’s fairy-tale love story coupled with the tragic hand of fate, has thrilled theatre-lovers all over the world. The 1996 movie starring Madonna as Eva, Jonathan Pryce as Perón, and Antonio Banderas as Che Guevara went on to win an Oscar and three Golden Globes.

The finest ever pairing of Tim Rice’s lyrics and Andrew Lloyd Webber’s music has created some of the best loved songs in musical theatre, including Don’t Cry For Me Argentina, On This Night of a Thousand Stars, Oh What A Circus, You Must Love Me and Another Suitcase in Another Hall.