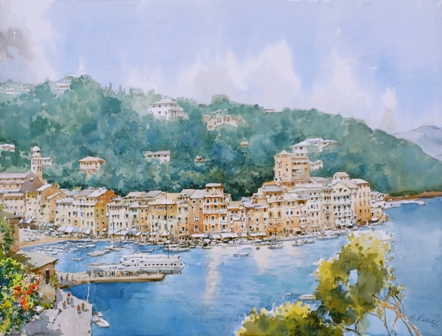 A self-taught artist who turned full-time in 1985, Ong Kim Seng is an avid traveller who has sojourned across different states and continents in his attempt to encounter and capture in his paintings, the awe-inspiring beauty of Mother Nature and the diverse cultures that exist in various environments. With this exhibition, the artist walks us through a series of masterfully-rendered landscapes that include Singapore’s Old Chinatown, Nepal’s Kathmandu, Italy’s Portofino, China’s Xin Yuan and Bali’s Ubud. Exhibiting fluid brushwork and efficiency of detail, Kim Seng’s watercolour landscapes are remarkable for their lyrical expressiveness and poetic balance between light and shade.

Ong Kim Seng, BBM AWS DF NWS, is among the most acclaimed watercolour artists in Southeast Asia. He is a winner of 7 awards from the prestigious American Watercolour Society in New York as well as the first Asian outside of the U.S. to be awarded its membership. In 2000, he was conferred the distinguished Dolphin Fellowship by the American Watercolour Society. In addition to local and overseas museums and galleries, his paintings can be found on display in several foreign missions and embassies representing Singapore. The watercolour maestro also counts Queen Elizabeth II, Mr. Koizumi (former Prime Minister of Japan) and Mr. H.E. Kofi Anan (former Secretary-General of the UN) among the long list of royal figures and diplomats who are patrons of his works.