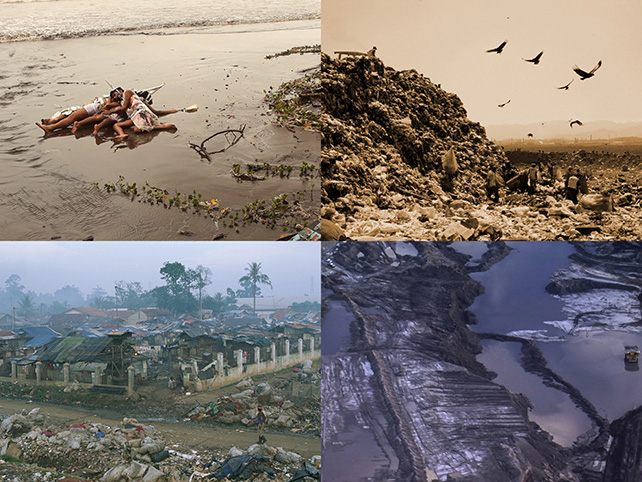 This film programme accompanies the exhibition, The Posthuman City. Climates. Habitats. Environments. It involves a selection of 11 artist films that expand on the exhibition’s topics, as well as two sci-fi classics.

Screening on loop during opening hours.

31 December 2019 – 5 January 2020
Jan Peter Hammer, Tilikum, 2013 HD-video, colour, sound, 45 min
The film charts the entangled history of behaviourism, neuroscience, animal training, interspecies affection, and English-speaking dolphins. Its narrative starts on 25 February 2010 with a 911 call. Seconds after having completed a live performance at SeaWorld Orlando, Florida, a trainer Dawn Brancheau was dragged underwater, drowned and dismembered by Tilikum, a bull orca. He was Tilikum’s third victim. The film reveals details about the entertainment-industrial complex which SeaWorld is a part of, and the connections between the earliest oceanic leisure centres and Cold War military research, from Hammer’s research on the incident.

7 – 12 January 2020
Jonathas de Andrade, O Peixe [The Fish], 2016 16mm film transferred to 2K video, sound, colour, 37 minutes
The film adopts an aesthetic style typically employed in ethnographic films by anthropologists from the 1960s and 70s when recording the cultures and traditions they study. In a series of vignettes shot on 16 mm film, we witness what seems to be an intimate ritual—one actually invented by the artist—among fishermen in a coastal village in North-eastern Brazil. The camera captures individual fishermen as they catch and then tenderly hold their prey to their chest until it stops breathing. There lurks an understanding that this gesture disguises violence as benevolence and suggests a symmetry between the power that humans wield over other life forms.

14 – 19 January 2020
Fabrizio Terranova, Donna Haraway: Story Telling for Earthly Survival, 2016 Colour, sound, 81 min
Donna Haraway is a prominent scholar in the field of science and technology, a feminist, and a science-fiction enthusiast who works at building a bridge between science and fiction. She became known in the 1980s through her work on gender, identity, and technology, which broke with the prevailing trends and opened the door to a frank and cheerful trans-species feminism. Haraway is a gifted storyteller who paints a rebellious and hopeful universe teeming with creatures and futuristic trans-species, in an era of disasters. The filmmaker Fabrizio Terranova visited Donna Haraway at her home in Southern California, producing this rare, candid, intellectual portrait of a highly original thinker.

21 – 26 January 2020
Armin Linke, Pulau-pulau kelapa sawit, 2017
In collaboration with Giulia Bruno and Giuseppe Ielasi. HD video, colour, sound, 95 min With footage of oil palm plantations, active peat fires, and olive-related production sites in Java, Sumatra, and Kalimantan (Borneo), the film illustrates why the oil-farming business has grown so rapidly in Asia. Various stages of palm oil production are linked through provocative interviews with residents, activists, scientists, and government officials who express their often-conflicting views on the transformation of Indonesia into a palm oil nation. While the pace of production has positively impacted Indonesia’s GDP, the steep rise in demand for palm oil and its derivatives has dire consequences for Indonesia and its rainforests.

28 January – 2 February 2020
Liam Young, Seoul City Machine, 2019 Digital 3D film, sound, 7 min 41 sec
Seoul City Machine is an abstract sequence of vignettes, fragments and moments of a city where machines and technology are now the dominant inhabitants. It portrays the urban landscape of tomorrow; a city in which all of the fears and wonders of emerging technologies have come true. An AI chatbot voices its own creation story through its City Operating System to the citizens it affectionately manages. Using contemporary Seoul as a visual backdrop, the present-day city is overlaid with cinematic visual effects to depict an autonomous world where drones fill the sky, cars are driverless, streets are draped in augmented reality, and everyone is connected to everything.

4 – 9 February 2020
Karlos Gil, Uncanny Valley, 2019
The film is a dystopian sci-fi story that takes the replacement of waiters in Japanese restaurants by androids as its starting point. It explores complex existential problems due to the Uncanny Valley Hypothesis in the field of robotics: in which an android created too much in the image and likeness of a human faces rejection. The underlying themes of the video deal with the relationship between machines and humans based on the encounter between an android and its doppelgänger. Through this relationship and the implementation of Artificial Intelligence (AI) in everyday life, the film reflects the socio-economic paradigm effects by the technological transformation.