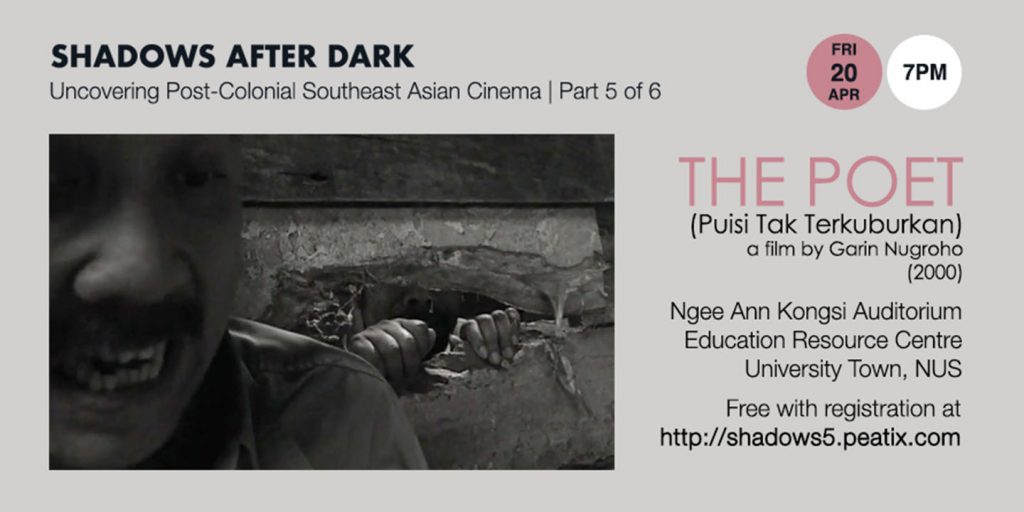 Shot entirely inside two prison cells, Garin Nugroho’s film The Poet (Puisi Tak Terkuburkan) shows how the communist purge also affected the lives of their families—their parents, their children, and their spouses. Concentrating on Ibrahim Kadir who played himself, a didong (a traditional Acehnese performance incorporating dance, singing and poetry) practitioner from Takengon in Sumatra – he is accused of being a member of the PKI (Communist Party of Indonesia) and jailed for almost a month without being informed of the charges against him. In a series of captivating scenes, Kadir leads a didong group and speaks of how he himself is unsure about his own future, having witnessed the grief of those who were mere hours away from death. The film won the FIPRESCI Prize and the Silver Screen Award for Best Asian Actor at the Singapore International Film Festival in 2001.

Shadows After Dark: Uncovering Post-Colonial Southeast Asian Cinema is a new lecture-film series, conceived with Dr Darlene Machell Espena, that follows a chronological development of Cold War cinema in post-colonial Southeast Asia. Consisting of six parts, this series will attempt to uncover trajectories and examine the visual culture of the period. It is organised from the discussions around the exhibition ‘Who Wants To Remember A War”: War Drawings and Posters from the Dato’ N. Parameswaran Collection.