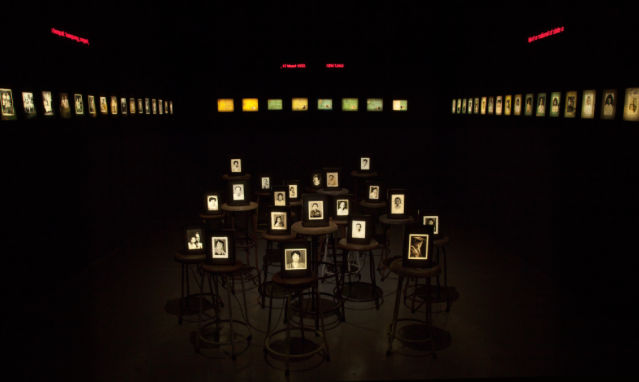 FX Harsono is a seminal figure in the Indonesian contemporary art scene. Since his student days he has been an active critic of Indonesian politics, society and culture, always updating his artistic language to the current new social and cultural contexts. Harsono’s own biography and family history are often the basis of his art, pointing at the disconcerting situation of minorities, the socially underprivileged against the backdrop of Indonesia’s own history and political development. This intersection of the personal and the political is particularly evident in his most recent works.

Gazing on Identity, presented by FX Harsono, offers monochrome photos of Indonesians of Chinese descent in light boxes on a table and attached to a wall. Harsono’s art piece seeks to challenge racist and discriminatory rules as a legacy of colonialism that remains in effect up to the present. The installation is placed in a dim room, seemingly intended to affirm the gloomy condition of Indonesians of Chinese ancestry today. Furthermore, his oeuvre can be seen as a constant questioning and reflection of his own position as an artist within society. He deconstructs the concept of the self portrait, interrogating the conventions of portraiture by deliberately obscuring one of the major components of a portrait, the face.