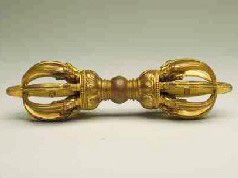 China and India are among the oldest of civilizations, and interactions between them have a long history. What aspects of today’s Chinese culture can be traced to India? What stories can a goddess who used to be male, a child-god, a lightning bolt, a monkey, and other objects in the galleries tell us about the ancient links between two great civilizations?

Free with museum admission. Limited to 20 visitors on a first-come-first-served basis.