GAME OF THRONES – A Pencil Microsculpture Exhibition by Salavat Fidai 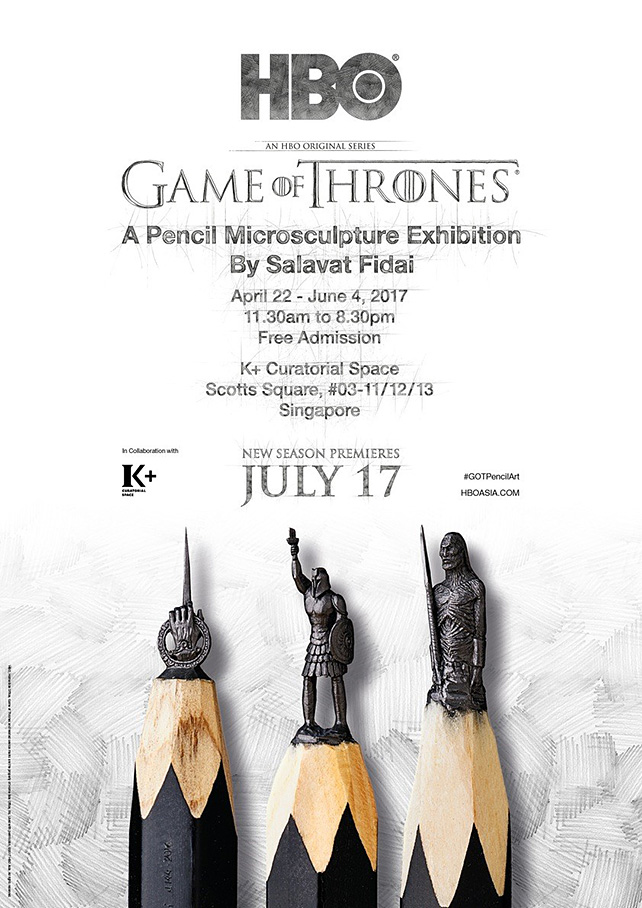 HBO Asia has commissioned Russian artist and sculptor, Salavat Fidai, to produce 16 GAME OF THRONES themed sculptures into the tips of fragile graphite pencils. The 16 pencils on display will include the microsculpture carvings of the Iron Throne, sigils from House Stark, House Targaryen, House Greyjoy, House Baratheon and House Lannister, as well as the Hand Of The King pin, Cersei’s new crown, Drogon the dragon, the Three Eyed Raven, the Night’s King, a White Walker, the Titan of Braavos, the Weirwood tree, and two swords – Brienne of Tarth’s Oathkeeper and Jon Snow’s Long Claw.

Salavat Fidai is world-renowned as one of the leading experts in the field of miniature sculpture, creating intricate and detailed art on the tips of pencils with diameters between 2mm to 5mm. The father of three children was born and raised in a small village at the foot of the Ural Mountains in Russia and began this unique form of sculpting in 2014. As well as carving miniature sculptures, he also creates miniature paintings on seeds and matchboxes.