Generosity is the Greatest Virtue 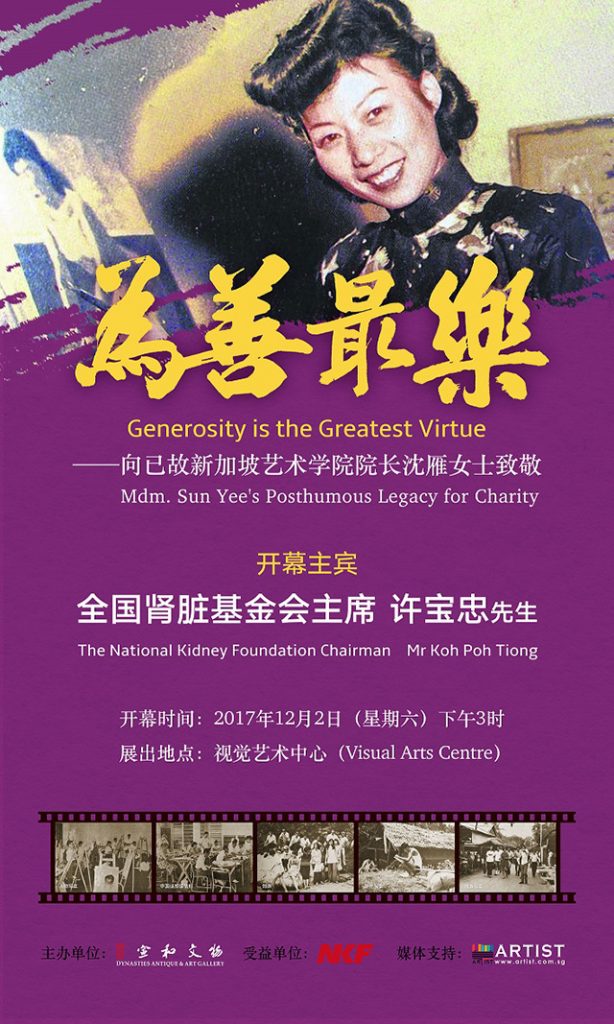 This exhibition is organised by Dynasties Antiques & Art Gallery to exhibit 31 masterpieces of the late Mdm Sun Yee for the benefit of the National Kidney Foundation (NKF) as a mark of respect to Mdm Sun in memory of her lifetime of charity and as an artist.

Mdm Sun Yee (b.1919) was a world renowned female artist who was born in Zhejiang and furthered her artistic studies in Shanghai Art College. The blooms of her career started as she made a bold step to travel across the land and seas searching for new inspirations and earned her first solo exhibition in 1940, achieving resounding success. As a life-long learner, Mdm Sun decided to further her studies in art at Nihon University in Japan, and to France thereafter for comprehensive studies in Fernard Leger Studio, followed with her journey is the elements of Asia Art that she wants to showcase the world.

In 1955, Mdm Sun Yee travelled South-East Asia for exhibitions and she settled in Singapore since 1954, established the Singapore Academy of Arts- holding the position of a principal and lecturer- as well as became an active contributor in the emerging Malayan art world.

Her masterpieces were well recognised and received worldwide compliments for her Chinese brushstrokes and oil mediums. Mdm Sun’s works had garnered the attention of the National Gallery Singapore and art collectors. Her “Multi-Racial” piece fetched her record high of HKD $457,000 at Christies Auction HongKong in 2015. Her ink painting entitled “Malay Dance- Ronggeng” and “Indian Dance” is currently collected by National Gallery Singapore.