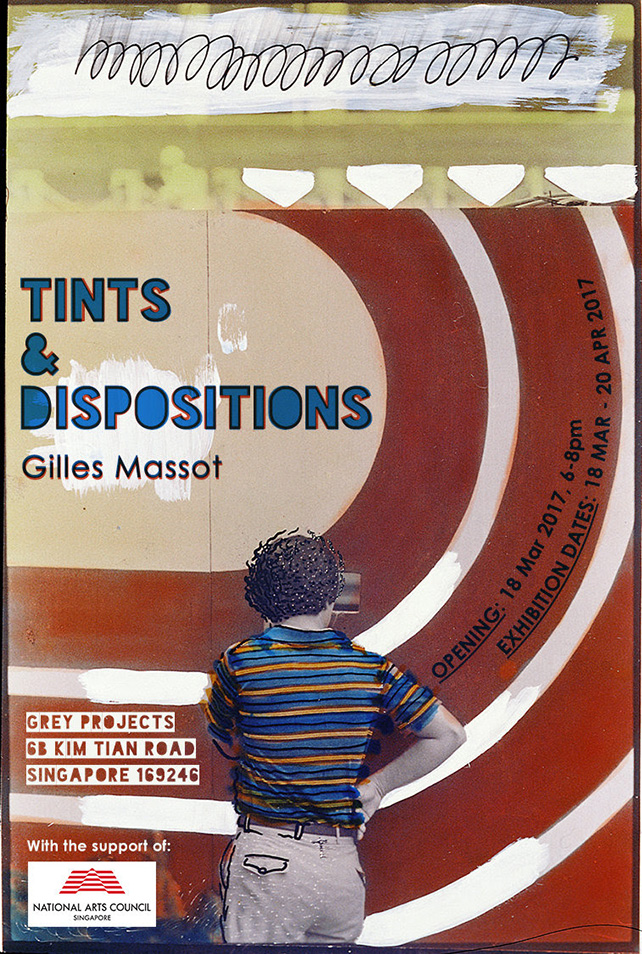 Tints and Dispositions is a series of photographic works by Gilles Massot, curated by Jason Wee.

In late 1985, Gilles Massot presented his first Singaporean exhibition Singapore From Black and White to Colour in the then unusual environment of a carpentry workshop, on the fourth floor of a flatted factory on Tannery Lane. His painted photographic works aimed to share the impressions and possible understandings he had gathered during his four years spent here, the city diversely known as a lion, a garden or a red dot (according to context and situation). This was a one-night-only event, an informal riotous combination of an art exhibition, on-site installation, and wild disco that ran late into the night.

Both in its content (painted photographs) and presentation (industrial space gallery setting), the 1985 exhibition was arguably a seminal event, part of a handful of other similarly spontaneous and unassuming events that by the mid 80s had began to shape the nascent local contemporary art scene. However, this private momentary art event was not covered by any media, nor was it written about by art reviewers. It thus remained mostly ignored, absent from Singapore art history until last year, when two publications finally placed it adequately in the chronology of this narrative.

Mostly shot in 1984, the photographs captured momentous aspects of the twenty-year-old independent city-state, a newborn nation the streets of which could hardly decide between a long held but vanishing colonial identity and the emergence of a buoyant self-induced confident modernity. The series started in the most traditional form of black and white street photography, moments in time framed by the black border of the negative (indicating the absence of cropping), the decisive moment as defined by the mastery of Cartier Bresson. Colour only progressively moved in. At first, it arrived as the reflection of a photographic realistic intention, faithful to the ancient art of hand tinting. However, it soon developed a character of its own with bold expressionist assurance, turning assertive to the point of fully overtaking the photographic pictorial quality. From vanishing reality to unrestrained fiction, the technique was unknowingly reflective of the post-modern school of thought then developing in Massot’s native France.

It is the graphic use of colour in the appropriation and transformation of the initial photographic realism that gave way to the defining direction for Tints and Dispositions. Three decades after its first presentation, the series has acquired a different meaning: time has lent to the work a historical significance that enhances its original artistic intent. It is no longer the series that is presented as such, but the process behind its emergence that is to be reflected on. The different stages that contributed to its final identity are presented as a new work, starting with the contact print, followed by the trials and errors, all the way to the later commercial spin-off and publications.