Heresy or Codswallop – A Solo Exhibition by Ashley Bickerton 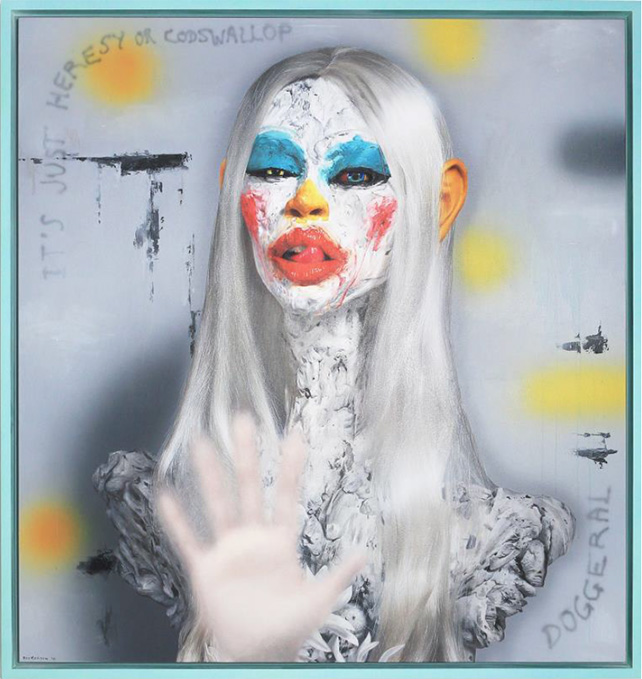 Presenting one of the most comprehensive surveys of his work to date, “Heresy or Codswallop” brings together the last decade of Bickerton’s practice, featuring works from 2011 to the present day.

In conjunction with Singapore Art Week, Gajah Gallery presents Bickerton’s work in a new light: despite his American origins, his work is rewritten here as wholly Southeast Asian. Known for his work in the early 1980’s New York East Village scene, Bickerton worked alongside Jeff Koons, Peter Halley, and Meyer Vaisman to spearhead an alternative to the Neo-Expressionist, commercially lucrative Soho mainstream. “Heresy or Codswallop” re-contextualizes Bickerton’s work yet with a similar ‘outsider’ presence, working away from the Indonesian art centres of Jakarta and Yogyakarta.
In 1993, Bickerton left New York for Bali, Indonesia, and since then has observed the dilution and transformation of a remote island to an international tourist destination. Bickerton draws from the cross-pollination of culture and its widespread decay, to explore the reality of the ‘island utopia’ as a de-cultured touristic locale that has been reconstructed to feed the westernized paradise ideal.

Since his move, several elements frequently appear – one, the blue man, a caricature of the stereotypical Western traveler, an ‘alien in paradise’; another, painted silver-white women, amalgamations with Pacific and Southeast Asian influences – ‘trophy wives’ Posing in typical tourist settings—in bars, or lazing around on hammocks at the beach—these paintings reflect a satirical look at our fetishization of what we deem ‘exotic’. Yet the irony of the situation is not lost on Bickerton, who often uses family and friends as the models for these personas – the silver lady often played by his wife, Balinese herself, and the Blue Man a self-portrait.

The flotsam paintings are Bickerton’s latest works, depicting beach debris laid out in undulating lines of waves washing ashore, to be reclaimed and transported by the sea – speaking of connected waters.

With a practice transcending the label of any one movement, Bickerton’s work is ever-evolving, with writer Paul Theroux warning “attempting a summing up of Bickerton’s vast and subversive body of work is pointlessly reductive”. His work persistently shifts – presenting a complex and multifaceted picture that defines our time.