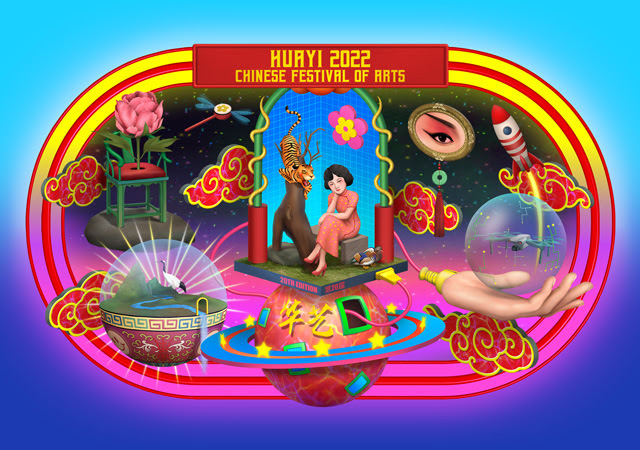 The 20th edition of Huayi – Chinese Festival of Arts brings to you new, original works by Singapore artists (five commissions and a co-production) that delve into what really matters in our lives in times like this.

First and foremost, family bonds. In the original play, Between You and Me, written and directed by Nelson Chia of Nine Years Theatre and featuring a strong cast, a long-buried family secret is unveiled when a celebrated actress and a mother of three daughters come under the spotlight once again after winning a prestigious film award. It is timely that as Nine Years Theatre celebrates its 10th anniversary in 2022, they are commissioned to stage their first large-scale production at the Esplanade Theatre. Or join Tuan Tuan as she hosts an
interactive virtual reunion dinner for family, friends and strangers alike in You’re Invited, a digital production by Artwave Studio commissioned for the festival.

Next, it’s about staying healthy. What would a music concert inspired by traditional Chinese medicine (TCM) and Chinese philosophy be like? Hear it for yourself in the newly commissioned work, 5lements by Ding Yi Music Company, Singapore’s leading Chinese chamber music ensemble commemorating its 15th anniversary in 2022.

What’s a healthy lifestyle without mental wellness? In the newly commissioned Get in Touch – A Theatrical Music Concert featuring pipa artist Gildon Choo and ruan musician Leah Lo, amongst others, we bring audiences on a musical journey that shines a light on mental issues and the importance of feeling connected.

Besides looking from within, we also need to be more aware of our environment and the struggles others are facing in our society. Veteran Singapore theatre practitioner Tan Beng Tian revives Karung Guni Boy, an original production for children, first presented in Esplanade’s PLAYtime! series, that teaches all of us to look out for the people around us. Experience the bittersweet stories of women from different eras fighting against traditional female stereotypes told through the language of dance in If It’s Now, co-produced with Singapore Chinese Dance Theatre.