In Our Own Frame 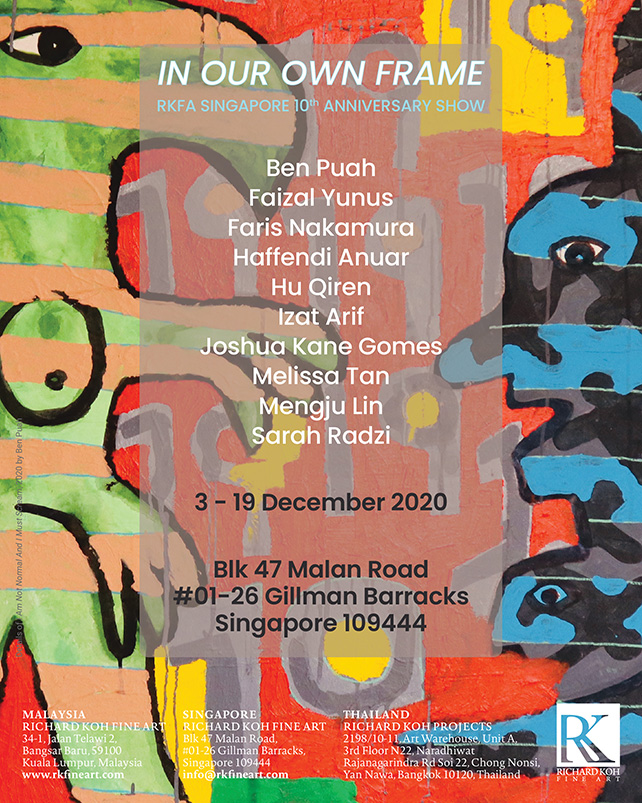 In Our Own Frame is Richard Koh Fine Art’s anniversary double-bill show in Malaysia & Singapore, which runs from 3 – 19 December 2020. RKFA (MY) celebrates its 15th anniversary and RKFA (SG) its 10th anniversary. This exhibition is not only a celebration of a journey taken by the gallery but also of the artists who have chartered their course alongside it. The group featuring in this exhibition is a mix of emerging and mid-career artists, most of whom have participated in group or solo shows with RKFA Singapore and Malaysia over the years.

Art in Singapore has evolved over the past 10 years. In Our Own Frame offers an insight into development of the local art scene in which the gallery has humbly contributed to the recognition of Singapore and Malaysian artists in its own unique way and brand.

Over the years, RKFA (SG) has taken various forms in terms of gallery spaces. It first manifested its presence along Duxton Road in 2010 with a quaint gallery space. The gallery’s arrival to Singapore was in tandem with the burgeoning art scene which was closely followed by the inaugural edition of Art Stage Singapore in 2011 and subsequently, the launch of Gillman Barracks in 2012.

Between the years of 2015 – 2018, RKFA (SG) operated primarily from the premises of Fine Art Storage Services (FASS) located within the Singapore Freeport. The art business had temporarily deferred to showcasing and promoting its artists on a private viewing basis. Though without a traditional brick-and-mortar space, RKFA (SG) frequently mounted pop-up exhibitions and participated in the local art fairs. In January 2019, RKFA (SG) moved into its current location of Gillman Barracks, launching its inaugural exhibition by Malaysian artist, Haffendi Anuar.