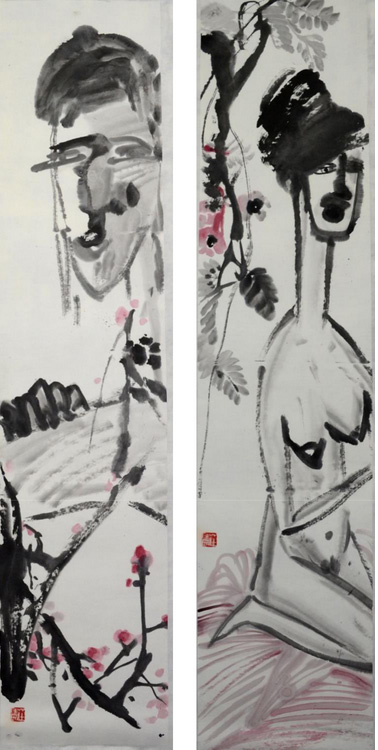 The exhibition features over 30 exhibits of ink paintings by the late artist Chuan Keng Boon and presents a chronological overview of his oeuvre. The official opening will be held at artcommune gallery on the 4th of August, 3pm to 4pm, and is officiated by Mr. Low Sze Wee, Chief Executive Officer of the Singapore Chinese Cultural Centre. Entry is free of charge, all are welcome.

Mr. Chuan Keng Boon (1953 – 2010) was born in Singapore, with an early interest in the arts. In his youth, Chuan’s artistic talents began to show, attracting the attention of the broader Singaporean art world. An active participant in art societies, Chuan served as the president of Nanyang University’s Art Society and Hua Han Art Society (1988-1990, 1995-1999). In 1989, Chuan was awarded the Tan Tsze Chor Art Award by the Singapore Art Society. With Beautiful HDB Flats, Chuan won first prize in the traditional Chinese painting category of the 1993 UOB Painting of the Year competition. With a passion for arts education, Chuan started to teach in community centers around the age of 30. This exhibition is curated and staged by a group of Chuan’s students, who have tapped on their intimate understanding of Chuan’s practice to delineate stages, influences, and periods within the artist’s career.

Chuan’s art development can be broadly summarised into three periods. In his youth, he absorbed the artistic traditions of East and West primarily from his art teacher at Catholic High School, Mr. Chen Wuchi, who taught him the basics of both traditions. He gained further training in oils in the Nanyang Academy of Fine Arts (NAFA)’s art vacation courses, where his works gained the approval of pioneer artists such as Cheong Soo Pieng. In 1973, he entered Nanyang University to study public administration but remained dedicated to art, serving as the university’s Art Society President from 1976-77. In this period, his ink art was most affected by the art of the Ming and Qing dynasties, particularly the Yeyi (free and leisurely) style represented by Xu Wei and Zhu Da (Bada Shanren), producing a series of daxieyi (large freehand)-style paintings. Two exhibited works from the 1970s are representative of this period.

After graduation, Chuan entered the civil service but continued to be involved in art. His flower and bird paintings (huaniao) of this time evolved from Bada’s influence to the styles of the Qing-early Republic, represented by the ‘Eight Eccentrics of Yangzhou’, Wu Changshuo’s haipai style (‘Shanghai School’ of painting), and Qi Baishi. His works of this period was highly commended by the local artist Mr. Fan Chang Tien, who brought the haipai orthodoxy into Singapore. He also entered the Hua Han Art Society. Chuan’s landscape paintings (shanshui) of this period began with a study of Huang Binhong, thereafter tracing a genealogy backwards to the ‘four monks’ of the late-Ming (Bada, Kuncan, Shitao, Hongren) and the Song-Yuan artists. This exhibition will showcase various flower and bird paintings in the haipai style and landscape paintings resonant of Huang Binhong’s legacy.

Chuan entered a new phase in 2003 where he could devote more time for his artistic pursuits after his retirement. His aesthetic styles also matured greatly during this period. Chuan’s huaniao paintings transcended the haipai inheritance to assume an idiosyncratic style. His landscapes escaped the boundaries delineated by traditions of textured strokes (cunfa) to assume an image that plays on the expressive interactions between paper, brush, and ink (what is referred to as bimo). Chuan also attempted to introduce Singapore into the mental landscapes of Chinese shanshui traditions, finding mountains and rivers in the buildings and streets of Singapore.