Inspirations from the Blue: Ceramic Pottery by Yukiharu Furuno 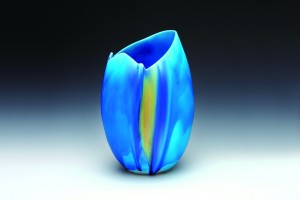 Inspiration from the Blue is a nod to Yukiharu Furuno’s award-winning Royal Blue series, a distinct new style created after the passing of his beloved wife in 2003. Prior to this series, his works used ash glaze made from soybeans and onion. These yellow ash glazed creations formed his primary style for more than 35 years.

Unfazed by the challenge of creating a new style and aesthetic at such an advanced stage in his career, Furuno broke new grounds with Royal Blue and drew a distinct line from his past works. Royal Blue is the product of a man’s grief and his tenacity to continue moving forward.

Furuno’s ceramics uses ash glazes made by plant materials native to Hannan, a city located in the Osaka Prefecture in Japan. The connection between the functional uses of nature and its immense beauty leads the inspiration of all his designs. This is probably the reason why Furuno’s works are known to exhilarates its viewers, bringing them into the depths of forests and over boundless oceans.

By: That Spare Room @ The Fabulous Baker Boy