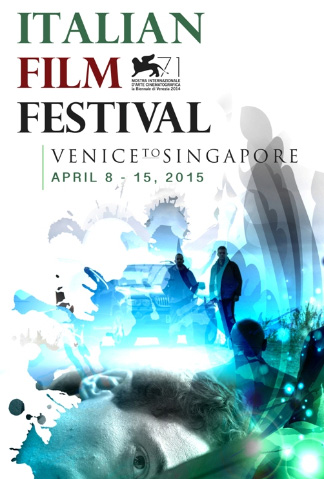 The 12th Italian Film Festival returns with a selection of films from the 71st edition of the Venice Film Festival. A not to be missed programme including films such as: Leopardi (Il Giovane Favoloso), a film about the short life of the great Italian poet Giacomo Leopardi; Hungry Hearts, starring Adam Driver and Alba Rohrwacher, both winners of the Volpi Cup for Best Actor and Best Actress; Black Souls (Anime Nere), an Italian-French drama directed by Francesco Munzi; Italy in a Day, which includes clips from over 45,000 video submissions recorded in one day; Umberto D., an iconic 1952 Italian neorealist film in which the majority of the cast includes amateur actors; A Special Day (Una Giornata Particolare), a very popular 1977 Italian film starring world famous actress Sophia Loren; Belluscone: A Sicilian Story; and China is Near (La Cina è Vicina), a satire about the struggle for political power.

The Italian Film Festival: Venice to Singapore 2015 is presented by the Italian Cultural Institute in collaboration with the Venice Biennale and in partnership with National Museum of Singapore and Cathay Cineplexes, with the support of the Singapore Film Society.

Bookings: All Cathay Cineplexes and online at tickets.cathay.com.sg
Tickets to the films screened at the National Museum are available at
http://italianfilmfestival.mticketplus.com