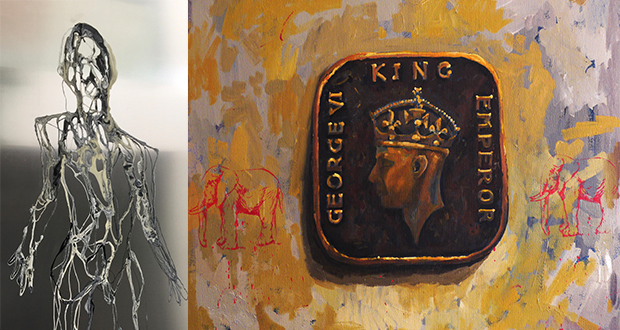 iPreciation is pleased to present an upcoming exhibition by Singaporean artists, Baet Yeok Kuan and Chng Nai Wee. “Juxtaposition” will feature a new selection of mixed-media works that reflect personal narratives and their mutual interests in exploring new possibilities in the medium of painting. In Baet’s oil paintings, he delves deep into his childhood memories, taking inspiration from objects that hold special meaning, such as a set of colonial era coinage and a yellow lemon. On the other hand, Chng’s series of semi-abstract images display his comprehensive knowledge and study of the human body and its hosting of the spirit and consciousness. Both artists also experiment with new production techniques, fusing traditional media and digital technology, such as life-sized aluminium panels, oil painting and digital ink transfer.

Baet Yeok Kuan (b. 1961, Singapore)
Baet holds a Diploma in Fine Art (Painting) from the Nanyang Academy of Fine Arts (1987) and a Masters in Fine Art from the University of Central England, Birmingham (1992).In 1995, he was conferred the Young Artist Award by the National Arts Council Singapore. He has represented Singapore in several international symposiums including the New Generation Contemporary Singapore Art Exhibition and Symposium, Japan (1990) and Second ASEAN Artist Creative Interaction, Indonesia (1997), Singapore-India Artists Exchange Programme, India (1999) and Artist-in-Residence in University of Philippines (2003). He has also won several awards such as the Grand Prize of the UOB Painting of the Year Competition (1987), Second Prize in the Contemporary Art Competition (Sculpture), Area Prize and Judge Prize in the Third Tokyo Urbanart Competition (1994).

He was President of the Modern Art Society Singapore from 2003 to 2004. He has also completed many local public art projects, including Singapore Changi Airport Terminal 3, National Museum and National Library Board. He recently completed a site-specific installation “24 Hours in Singapore” on the Asian Civilisation Museum lawn, in commemoration of SG50, an inaugural commission by the Public Art Trust. He is currently the Vice President of Federation of Art Societies and Modern Art society Singapore. To date, he has held six solo exhibitions and participated in numerous group exhibitions locally and overseas, including Asia, Australia, Canada, France, United Kingdom and United States. Baet’s works have been collected by museums and notable private collections, including Fukuoka Art Museum in Japan, National Museum of Singapore, National Arts Council, National Art Museum, NUS Museum, St. Regis Hotel and Mapletree business city.

Chng Nai Wee (b. 1969, Singapore)
Chng graduated with an Honors in Medicine and Surgery from the Royal College of Surgeons in Ireland (1993) and Ophthalmology from the National University of Singapore (1999). He attended Nanyang Academy of Fine Arts classes from 1986 to 1987. He also studied in Yale University School of Architecture (1999, 2004 & 2014) as a graduate student. He has delivered lectures on Art and Technology, Art and Dot-Com Resources, and received Hitwise Online Performance Awards for his comprehensive documentation of Singapore Art. His works draw inspiration from his unique background in Biomedical Sciences, Design, and Information Technology. He has also served as a speaker for the inaugural Creativity in the Arts, Sciences and Technology seminar at the National University of Singapore, a judge for the Singapore Sculpture Competition, and a member of the Arts Education Council. Among the awards that he has received are the Young Artist Award, National Arts Council (1999), Tan Tse Chor Art Award, Singapore Art Society (1995), and Double Honorable Mentions, Philip Morris Asean Art Awards (1994).

In his wide repertoire of works, he displays a deep understanding of Anatomy and Histology, as seen in his solo show, Biotechnics, at the Substation, Singapore (1998). His outdoor light art installation, Moleculux – Luminsecent Bodies in Hyperspace, in his solo show at Sculpture Square, Singapore (2001), displayed his profound interest in the intersection of geometric modular construction and optics. Other solo shows include Recent Works (1994), and New Works (1991) at the National Museum Art Gallery. Chng has also exhibited at the inaugural show of Sculpture Square (1999) and Esplanade (2002) with his work “Biotics”, which posits a future of pharmaceutical enhancements of the Human race, and “Like or Not?”, large scale pneumatic sculptures at the latter venue, that question the relationship between perceptual affinity and biomimetic architectural forms. His public works include Panthenon – Innards of Consciousness (Biopolis, Singapore, 2003), and Techgenesis (National Arts Council lobby (1999), a fusion of the innards of computer circuitry and raw construction materials. His works have also been permanently acquired by the Singapore Art Museum.