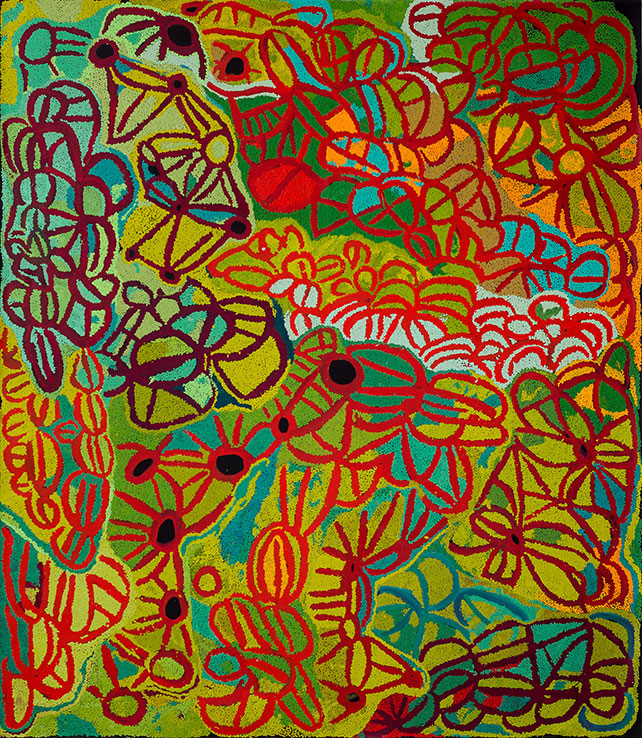 In October 1986, a desert-dwelling family of a community known as the Anagu tjuta pila nguru, or “people from the land of the spinifex” became the last Aboriginals in Australia to abandon traditional nomadic life. A male elder who had escaped from the Warburton mission with his young wife and stepdaughter twenty-five years earlier headed the family of seven.

Returning to the red-earth landscape of spinifex grass and mulga, they raised their children, remaining in the wilderness as family and friends departed for mission life. The family walked from rock hole to rock hole spearing kangaroo, emu, goanna, blue-tongued lizard and mallee hen: the last of five hundred generations to pursue this nomadic way of life across a stretch of remote country now stripped of all other residents.

Seeing the glint and streaks of aircraft in desert sky, they threw magical objects at them and sang protective songs. White people were ghosts traveling above them and across the land. The couple told their children that distant trains were roaring Wati Wanampi, venomous water-snake beings.

From a hill overlooking the Blackstone mission settlement (today, Papulankutja) the children witnessed what they believed was a pitched battle between legendary warmala or warriors. The frightening vista was of an amateur football skirmish. It would be the family’s closest brush with the outside world until 1986.

Exiles living at the Coonana settlement for those displaced by the Maralinga nuclear tests of the 1950s believed their lost desert relatives dead. Stories about the family’s survival continued to circulate, however. In 1986, when a group from Coonana made a ceremonial visit to a remote desert site, they discovered fresh footprints. After following the trail for two days, they sighted a family carrying wooden spears and painted with ochre in preparation for ritual.

Reunited with kin, the husband and wife recognized relatives among the searchers. The male elder wept quietly upon hearing news of people he had not seen in decades. Relocated to mission settlements, the family of former nomads generated news reports about “the lost people” and “the last desert tribe.” The Sydney Morning Herald reported: “the three sons, the younger woman and her little boy had never seen the modern world before.”