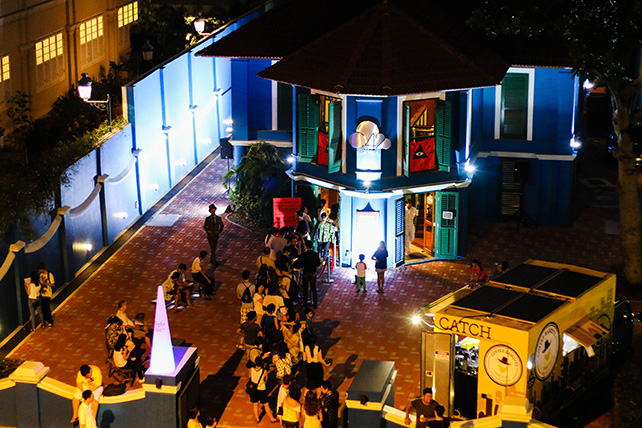 The fun officially starts after the sun goes down, and Centre 42 is throwing open the doors of its blue house on Waterloo Street on Saturday, 20 August for the public to enjoy a free evening of exciting textual experiences. Held in conjunction with the Singapore Night Festival, this one night only event is titled Late-Night Texting and features over 15 bite-sized, text-based performances by four local groups.

As a non-profit organisation that supports new writing for the Singapore stage, Centre 42 provides a space and platform for theatre makers to create works. With Late-Night Texting, the Centre hopes to serve as a playground for the wider arts community to experiment with text-based performances. The event also provides an opportunity for visitors to explore the quiet but charming enclave of Waterloo Street.

The line-up for Late-Night Texting includes EAT MY SHORTS by Dark Matter Theatrics, which comprises a series of nine short plays, each ten minutes long, written by local playwrights and enacted by Danielle Cutiongco, Salif Hardie and Jasmine Xie. Short plays have rarely been staged in Singapore since the Short and Sweet Festival ended in 2011, so this would be a great opportunity to experience this format in performance. Saga Seed Theatre, meanwhile, is showing SEEDY STORIES, where six sensational stories of crime, conspiracies, and superstitions are brought to life around the nooks and crannies of Centre 42, starring Deonn Yang, Ric Liu, Tim Nga and Zelda Tatiana Ng, and directed by Thong Pei Qin.

For something more off-the-cuff, there’s A LITTLE NIGHT MUSIC by Les Musicables, the musical theatre arm of The Improv Company, who promises to stage two full-scale improvised musicals based on audience suggestions. And last but not least is ONE MIC STAND by destination: INK, which sees eight poets take to the mic for a series of spoken word performances.

On top of these showcases, BooksActually is setting up a pop-up store for those looking to build up their collection of local literature, while the Coffee Bandits food truck is on hand to keep the food and drinks flowing all night long.