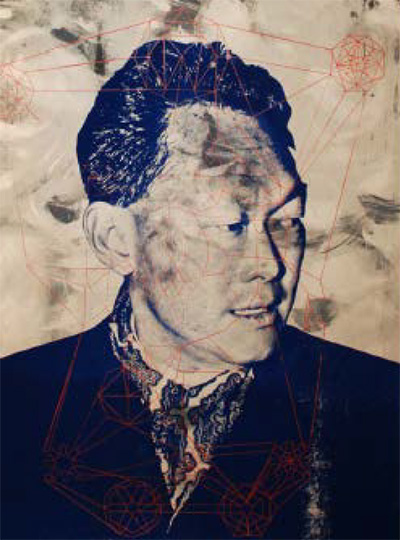 The net proceeds from the sale of the artworks will be donated to research on ageing at NUS Medicine; we aim to raise SGD $500,000 for NUS Medicine’s important and leading research in the field of ageing and ageing-related diseases.

Laudi Abilama, a Lebanese artist, is focused on people and personalities, commenting on events and circumstances that have at some point influenced or touched her. Working from her studio in Broummana, a Lebanese town in Mount Lebanon, she uses a screen printing technique (a stencil method of print making in which a design is imposed) on paper and linen. She mixes her own pigment and forces it into the mesh openings by the fill blade or squeegee and onto the printing surface during the squeegee stroke, printing one colour at a time, which makes each piece unique and not duplicable. Integrated into her images are subtle, spontaneous, un-calculated traces of oriental forms, created much in the same way they were hundreds of years ago. She exhibited in Lebanon, England, the UAE, Kuwait and Singapore and her work has been acquired by collectors around the world, and sold at Sotheby’s in London.