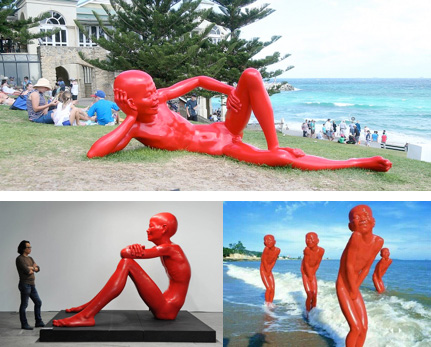 Chen Wenling, one of the top contemporary sculptors in the international art industry, will be in Singapore this month end. He will be hosting a lecture session at Ode To Art gallery on 31st August.

Known for his provoking and interesting twist in his sculptural works, Chen Wenling shot to artistic fame with his ‘Red Memory’ series. Through a variety of surreal sculptures—most often executed in a bright monochrome red—he examines the rapid rise of consumerism in modern-day China and the fraught relationship with its more austere Communist past.

He quickly found international critical and commercial success, with his work exhibited both within China and abroad at the Guangzhou Art Museum, the Duolun Museum of Modern Art, and Basel Switzerland. In 1999, Chen won the Venice Biennale’s top prize, the prestigious Golden Lion. In 2005, he received the award for best installation in the Museum for Inopportune in France.

After his impressive display of the Red Memory series in both Cottesloe and Bondi Beach in Australia, Chen Wenling has been recently invited to return to exhibit in Denmark in 2013 due the well-received demand in 2011 exhibition. He continues to exhibit around the world and lives and works in Beijing, China.